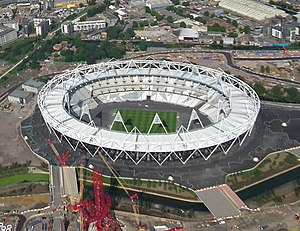 When it comes to searching for apartments, the trend has been for many North American expatriates to settle in north and west London. South London, too, has become more of a draw as late for young families. No question about it, the extensive renovations carried out for London 2012 on London’s east side were meant to revive an otherwise blank and industrial area into something vibrant and residential.

So, is east London going to see a big property boom to follow the Games, or is all that glitters out there just Olympic gold?

Ever since London was named as 2012’s host city in 2005, property owners and developers have rubbed their palms together, sniffing out major opportunity. The UK government has been delighted as well with the substantial private investment already infused into the area prior to the Games—totaling more than £1.5 billion GBP intended to create over 6,000 apartments and houses and four million square feet of office space, per The Telegraph. Newham alone has seen over 3,000 new apartments worth over £100 million.

Delancey and Qatari Diar, for instance, have paid £557 million to buy and manage about 1,500 rental properties at Olympic Village; they also own nearby lots that could yield another 2,000 homes. Inter Ikea proposes to construct 1,200 apartments, a hotel, and almost half a million square feet of commercial space. And pension funds, too, have helped comprise a mixed group of overseas investors heavily contributing to the Olympic Park vicinity, including the Dutch APG and Canadian Pension Plan Investment Board, which purchased half of Stratford City’s new and sprawling Westfield shopping center.

It’s expected that 8,000 new units will be developed in Olympic Park after 2012; under a quarter of these will be own by Triathlon Homes (a conglomerate of one design firm and two housing associations) and rented/sold as “affordable” properties.

Transport has felt the impact as well, with nine different rail lines accessible to Olympic Park, including the high-speed Javelin train that travels 225km/hr from St. Pancras. In all, £20 billion has been invested in transport to add that much more convenience and appeal and hopefully spark interest in new apartments.

London has found no shame in using the Olympics to showcase its reality and potential as a hub for business and quality of life. Traditionally a disadvantaged, relatively impoverished region of the city, east London is seizing this chance to find new life.

THE PRICING OF EAST LONDON APARTMENTS

As London seems to watch and wait for the ultimate effect on east London of the 2012 Games, housing in and around Stratford has indeed risen in value since 2005. Increasing about £800 per month, this so far translates into a 30% increase in value—in Homerton and Dalston, that figure is 55%. In comparison, consider that England and Wales on the whole have seen an increase of 25%.

Rent prices on east apartments also rose, of course. As mentioned in my previous post, this is largely attributable to the fact that many landlords have asked for astronomical short-let prices for renting their apartments during the Summer Games. According to Gumtree.com (an online classifieds site similar to Craigslist), the average rent on short-term apartments increased almost 450% for July over last year.

Geez…nice try, landlords. It all obviously begs the question whether this property boom can last for long. Is it really just an Olympics Effect on east London in particular? Or does it have something to do with the fact that housing prices have outperformed the UK at large time after time? It’s only fair to mention that 14 east London postcodes surrounding Stratford experienced losses in the last year; Bethnal Green, for example, saw values drop just over 5%.

Yet while drops in value aren’t great for owners, they sure are for buyers and renters—especially with the glut of apartments left behind when short-term renters vacate after the Games. So perhaps if you’re moving this year or next, the east will be an attractive option for modern apartments and amenities?

No doubt Olympic Park is a source of fascination for us all right now. As a ticketholder for the Games, I couldn’t get out there fast enough to explore it and see the dramatic change in landscape. I didn’t even mind the long tube ride back to west London and duly noted that the commute from east London apartments to the city center itself wouldn’t be too shabby at all for professionals living and working in east London. The Westfield mall is immense and designed to a high standard—if only every shopping center could offer options like Spanish tapas or Lebanese cuisine as a break from the usual Sbarro pizza slice or Mrs. Fields cookie.

Yet looking at it from a residential standpoint, the fact remains that once the Olympics are over, there’s really not a whole lot to do out there. I’m sure all the necessities are at-hand—and yet to come in Stratford is a new school, park, and leisure centers—but I couldn’t say there’s a lot to offer just yet in terms of lifestyle. It’s tough to tell so far what businesses and activities the area could go on to attract.

But for those interested in new builds, the east side offers good infrastructure and a proliferation of contemporary apartments this historic city previously couldn’t offer. Canary Wharf and Battersea have been the two usual recommendations where new construction is concerned, so having so many more alternatives and hopefully getting a lot more pow for your pound in the anticipated tenant’s market is a great big plus for choosing apartments.