Expect the Unexpected in Flats for Rent in London 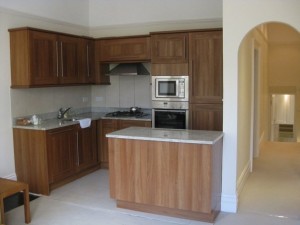 While at first it can feel a bit like playing Hide-and-Go-Seek with your appliances, I love the concept characteristic to many kitchens found inside flats for rent in London. In keeping with a space-saving mindset (which you’ll notice is key as you’re searching apartments), a large number of refurbished flats to rent in London conceal their major kitchen appliances behind doors matching the rest of the cabinetry. Fundamentals like refrigerators, freezers, dishwashers, and washer/dryers are clustered together out of necessity, but the way they remain hidden from view helps compensate for that from an aesthetic standpoint. I actually think it makes more sense design-wise and would renovate a future kitchen of mine the same way.

And you’re giving me your full attention, yes, you read that right: I did just say “washer/dryers” with regard to the kitchen. Given their relatively diminutive layouts, it’s rare that you’ll find flats to rent in London coming equipped with separate laundry rooms or side-by-side washers and dryers. The norm is to have a single side-loading washer beneath your kitchen counter, and—further in the interest of space-saving—this washer might also be the dryer, draining water out before blasting in hot air. That fact is either really brilliant or really unsettling… In reality, though, you’ll probably use drying racks more than the electric dryer anyway—the small size of washer drums requires you to launder a greater number of smaller loads (plus, leaving them to dry in that small drum could set in some horrendous wrinkles). Ah well, it’s energy-saving.

Bathrooms Inside Flats for Rent in London

More mysteries lay beyond when you enter the bathrooms of flats for rent in London. To be clear in terminology for a moment, the commonly known term “loo” is indeed a nickname for bathrooms, but you may also hear your London Relocation agent or estate agent refer to the second bathroom of flats for rent in London bluntly as “the toilet.” Typically, a “bathroom” actually houses the bathtub and/or shower, and what Americans know as a “half-bath” would in fact be the “toilet” if all it contains is toilet and sink.

No matter what you call it, expats may be surprised (and not a little disappointed) to see in the bathrooms of flats for rent in London what often merely amounts to a pedestal sink with nary a shelf or cabinet to compensate for lack of counter space. If the bathtub itself is vintage like the property, it might be smaller than modern proportions and the shower stalls a tighter fit. The shower might not be a freestanding entity at all, in fact, but a hand-held showerhead attached to the bathtub.

You might also find that hot-and-cold water is reversed on some faucets, and, rather than a handle for flushing the toilet, it’s common to have two buttons on the wall (large and small to indicate strength of the flush). That last feature in flats for rent in London is actually quite a good thing for conserving water, as are the built-in towel warmer racks on most bathroom walls for both drying towels quickly and heating the room like a radiator.

Making the Most of Flats for Rent in London

A couple more odd features of flats for rent in London that aren’t restricted to just the kitchen or bathroom involve electricity. You might find that the light switch to a room isn’t located in the room itself but, rather, just outside its door (which is the case with my bathroom). Or that you have to click on a light when entering the common area of your building (i.e., the main entry and stairway) as it will automatically turn off after a minute or two to conserve energy. Also note the power outlets inside flats for rent in London—they will likely have their own switches to turn off when not in use for an appliance.

When it comes to finding great flats for rent in London, it’s good to set your expectations realistically early on. Differences in size, storage, conveniences, and other features might come as a disappointment, but the fact is a lot of landlords have refurbished their flats for rent in London to a high, modern standard to make the most of what they’ve got to work with, so take the trade-offs as they come and just enjoy London!