Relocation to London – Fish and Chips Every Day 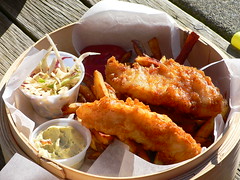 Those moving to London will quickly learn that fish and chips is to England as a burger and fries is to the states.  This totally British meal is a staple of the British diet and with over 8500 fish and chip shops is one of the most popular dishes in the country.  Although there is some debate as to the origin of the beloved meal there is no debate as to its popularity.

Potatoes had been popular and easily grown in the UK for hundreds of years before the first ‘chips’ were made.  Many claim the chips craze originated in France and was brought over to England by French immigrants.  Being a country steeped in the fishing industry white fish have always been abundant and plentiful.  In the early 1860s the first fish and chip shops opened almost simultaneously in both London and Lancanshire.  The teaming of the two fried items became instant hits and soon fish and chip shops began popping up all over the country.

Fish and chips were incredibly popular with the working class and most shops were located near industrial factories and warehouses.  Those moving to London are most familiar with these types of workplaces from novels like Oliver Twist.  During World War II fish and potatoes were two of the only foods not rationed making them very popular with lines an hour long or more when shops actually had fish available.

Many families new to London due to international relocation question the health of a fried meal like fish and chips.  Although all fried food should be limited within one’s diet, Americans moving to London will be pleasantly surprised to learn that overall the meal is packed full of protein and vitamins essential to a healthy diet.