Living in London – ‘Neverwhere’, a book set in London

by London Relocation | 16 Jun 2011 | ABOUT LIVING IN LONDON, About Us, Americans Moving to London, General, London Neighborhoods, London Recreation | 0 comments 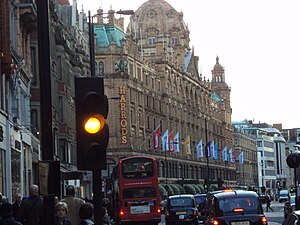 There was an earlier blog here about how cool it was to see parts of the city you knew from the movies. On a similar note, it’s just as cool to read about London in novels, fiction or non-fiction. It’s a given that you’ve come across references to the city in books, but if you’d like to add to that list of London-centric novels, you could do a great deal worse than Neil Gaiman’s fantasy novel, ‘Neverwhere’.  Even if you aren’t a fan of fantasy novels, it’s still a great novel to pick up. It’s about a man, Richard, who moves to London for work, and makes a life for himself in the city. Somehow or the other, he gets involved with a girl on the run from a scary pair of gentleman, and falls into the London that exists below the London everyone knows (called London Below, appropriately enough). Trying to get back to his normal life, Richard falls in with a group of London Below-ers on a mission to stop all hell from breaking loose in their world and the one above.

On their journey, they encounter warriors, killers, an angel, monsters, knights and all other sorts. And when you combine your notions of this city with bizarre characters like those mentioned above, then it all makes for an absolutely cracking piece of storytelling. But what really makes ‘Neverwhere’ worth the three days it’ll take you to finish it is the way in which it takes everything you know about the city and then turns it on its head. The notion of “mind the gaps” on the Underground for example is given a dark twist as is crossing Knightsbridge. The next time you go to Harrods, after reading the chapter set in that hallowed emporium, you’ll walk  its interiors with a knowing smirk on your face. Whether you’re moving or already living here, ‘Neverwhere’  is the kind of book that will almost certainly whet  your appetite for exploring the city even further.