Living in London – As English as… 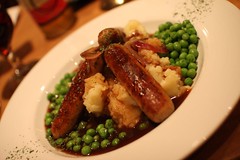 One of the things most people struggle with when moving to London is adapting to day to day living. When you’re moving to London, you must try to push that concern to one side so that your enthusiasm for the big move isn’t dampened by your anxiety for how it could fail. I think what really helps to ease the transition is discovering something that you like about your new home. It really isn’t that hard (unless you’re determined not to find anything you’ll like).

My personal list of favorite things about living in London probably amount to all the clichés that I’ve discovered are truisms. I mean the kind of things you read about in books or see in movies and then come over here and you discover that it’s just the way you pictured it in your head.  Like bangers and mash.

It really does sound like the simplest meal ever, doesn’t it? And it is. It really is. But it’s also very tasty. And when you combine ‘simple cooking’ with ‘very tasty’ you get what is officially the top recipe on The Lazy Person’s List of Cooking. Honestly, it really doesn’t get much better than this. Get some bangers (sausages if you’re new to this English thing), potatoes, baked beans (you could try gravy if you wanted but I did say this was for lazy people) and bread. Fry up the sausages, cook the potatoes and mash them, put the baked beans into a pot, get them hot and toast the bread. Now, arguably speaking, that’s more of a sentence than it is a recipe. But, like I said, it’s very tasty.

And if you’re the lazy sort of person and if it’s been a particularly trying day at the office, you could do far worse than stopping at your local Tesco’s on your way home from work, picking up the necessary ingredients and heading home for some (All together now) Bangers and Mash! It might not be up there on the list of the most wholesome meals you could eat while living in London, but it’s quick, easy and very English.