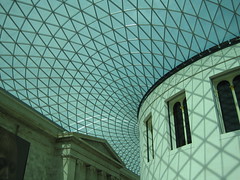 When you move to London, if you haven’t been there before, you have to make the British Museum one of your first stops (the beauty of working with a London relocation company like London Relocation, after all, is finding your London apartment and getting settled in quickly so you can play sooner!). Established over 250 years ago, the museum houses global treasures, not just those exemplifying what makes Britain great.

“But hold up,” you might be thinking. “Didn’t you mention something about manga in the title?”

“What’s with all this stodgy museum-talk, then?” you reply—in a rather snippy tone, I might add. But I forgive you. I’ll get on with it so you can finish reading this before you have to pack up the computer you’re using right now to actually move!

Move to London – The British Museum Gets With the Times

Just so you know, if you move to London, there’s nothing stodgy about museums, least of all the British Museum. Sure, I might have stifled a yawn in my day over the hundred-year-old taxidermy still propped up in cases at institutions even as cool as Chicago’s Field Museum, but one thing that never gets boring since my move to London is seeing the Rosetta Stone at the British Museum. It’s the freaking Rosetta Stone, people. And sculptures from the Parthenon, and Egyptian statues and mummies, and Assyrian and Asian and African artifacts and art, and, and…(a special prize is awarded to whoever is first to correctly count all the words starting with A in that last sentence).

At any rate, there’s no question that what’s old at the British Museum is quite impressive, but it’s what’s new that is impressing me most today. It’s been a while since I’ve dorked out on those of you planning a move to London with my London Literacy blog posts, but you’re in for a treat because today I just finished reading my latest London-related book: Professor Munakata’s British Museum Adventure, by popular Japanese manga artist Hoshino Yukinobu. The British Museum has really upped its hip factor in not only holding special exhibits on the relatively modern manga art form but taking it a step further and actually publishing its own manga book in collaboration with Yukinobu.

I’ve visited the British Museum several times since my move to London, but I first stumbled on this little manga gem in March while touring the—guess what?!—British Museum with my sister and niece. My nephew didn’t join them on this visit, and we were having a tough time brainstorming a London souvenir that he would enjoy. As a teenage boy who loves manga, my nephew would’ve loved to see the original drawings on display at the museum, so we made a point to view them ourselves in his honor—what a bonus, then, to learn that museum-inspired drawings of Yukinobu’s Professor Munakata character were available in a book of ten manga episodes on sale in the museum book store! Souvenir for nephew? Check. Buy an extra copy for myself? Check. (Well, actually I ended up ordering it for half-price at Amazon.co.uk, but shhh…don’t tell the museum store…or my sister who paid full price for her son’s copy.)

The long and short of it is that Hoshino Yukinobu had been invited to visit the British Museum in London in 2009 for a particular Japanese exhibit, and this visit ended up inspiring three Professor Munakata drawings that were themselves put on display. It was in 2010 that the manga artist returned for a second visit that inspired an entire storyline, and, after being given exclusive access to the British Museum and its collection, his creative, intelligent mind and artistic talent ultimately produced Professor Munakata’s British Museum Adventure.

This was my first official foray into manga, and it was such a new and imaginative means of appreciating a country that has already mesmerized my eyes, mind, and heart. Manga is a means of uniting ideas with images (and even sound), and the story Yukinobu has woven is well researched and cleverly crafted, blending historic and fictitious elements into a smart and exciting puzzle…and, yes, adventure.

What a concept…*SPOILER ALERT!*…the Stonehenge megaliths stolen and used to “bomb” London’s own St. Paul’s Cathedral and Great Court at the British Museum…all in the interest of stealing the museum’s Rosetta Stone…a grand heist funded by nations intent on the repatriation of their national treasures as historically seized by Britain (which is actually true—well, the desire for repatriation of artifacts, not the funding of any illegal activity to do so!)…and the museum’s own medieval Lewis Chessmen pieces used as clues planted throughout. Brilliant! Reading this manga will only make your British Museum visit that much more engaging—especially for your youngsters if you move to London with a family.