Relocating to London From A to Z: Happy Birthday, Your Majesty–AGAIN!

Moving to London before June 11th? Well, if you haven’t made the London move in time for this week’s royal gun salutes in honor of the Queen’s actual birthday (she just turned 85 on Thursday, April 21st), you’ve got another chance to make it up to Her Royal Highness. In today’s A to Z Blogging Challenge post:

“T” is for TROOPING THE COLOUR!

I was really tempted to run with “Trafalgar” on this one, but feel I’d be remiss not to mention an upcoming royal celebration that is quite cool—as peasant-folk, it’s probably our best chance of seeing the Queen of England!

As I mentioned above, 21 April is the Queen’s birthday (as in the real day she was born), but 11 June is her “official” birthday. According to the Trooping the Colour website:

“The first traceable mention of The Sovereign’s Birthday being ‘kept’ by the Grenadier Guards is in 1748 and again, after George III became King in 1760, it was ordered that parades should mark the King’s Birthday. From the accession of George IV they became, with a few exceptions and notably the two World Wars, an annual event.” 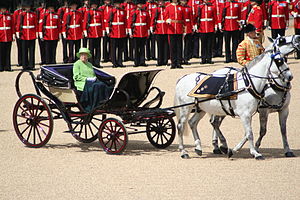 The custom of this seemingly oddly-named ceremony dates back to the 1600s during Charles II’s reign. The “Colours” (or standards) of a regiment were used as a rallying point for troops. They would be “trooped” in front of soldiers to ensure they’d recognize their own regiment in battle. The Foot Guards carried out this action in London as well as part of their daily Guard Mounting. And so the pageantry continues, with the colours being trooped on the Queen’s Official Birthday by her personal troops, the Household Division, at the Horse Guards Parade (found just off Whitehall between Westminster and Trafalgar Square; you can best approach it from St. James’s Park, which is the lovely landscaped green space by Buckingham Palace). At this ceremony, the Queen herself is in attendance to take the salute.

I told you it was cool! Tickets for seating are no longer on sale (they’re available only during January and February of each year), but anyone is welcome to attend “standing room only”-style. Yes, with that in mind, it might be tempting to just sit it out within the comfort of your rented London apartment, but, c’mon, seriously?! When all this is happening just a tube ride away? That’s not the way to make the most of your London relocation—if the Queen can make it out to party, so can you! 🙂