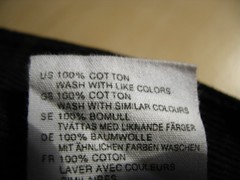 ‘Tis been a while since I’ve revisited my Speaking the Queen’s English series, which is dedicated to helping familiarize those moving to London with some basic differences between British English and American English. Any American expat who has made a London relocation can attest that sometimes you wish you had subtitles to understand a language you thought you already knew!

In the past, I’ve touched on topics like pronunciation, conversational lingo, getting around (transport and signage), food, etc., but today I’ll touch on some grammatical differences. I am an English teacher, after all… 😉

To start (and this is one I’ve only just picked up on while reading a British novel), it appears standard to use “has (or have) got” in British English than “has (or have) gotten” as we’ll say in American English.

When you move to London, you may also notice greater use of the word “shall” in place of “will” or “should.” E.g., “I shall never forget you,” or “Shall we go?”

And while the British may use “as well,” “too,” and “also” interchangeably as we do, “as well” is most commonly used.

While the previous three merely strike me as more proper/polite ways of speaking, the following is the most distinct difference I’ve heard in conversation here: use of “do” after an auxiliary verb. To give a few examples:

In American English, the above would be phrased:

It seems we Yankees either extend the phrase all the way out to “that” or cut it off right at the auxiliary verb, whereas the British only cut out the “that.” And speaking of cutting out words, “the” tends to get scrapped in British English when referring to certain institutions, such as “He’s in hospital,” versus “He’s in the hospital.” The same goes for “at university” versus “at the university,” though we Americans would do the same with our phrases like “in college,” “in prison,” “at sea,” etc.

Ah, and there is one particular phrase that has somehow evolved in American English into something that means the exact opposite of what it actually says. I think this one really annoys the Brits, too: “I could care less.” The thing is, an American would say this to convey that he/she isn’t interested in the least, so there’s no possible way one could care less than that. If that’s the case, however, then you “couldn’t care less,” which is how the British would say it. If you could care less, then, well, you’re saying you have the ability to care even less than you do, which is saying you do care to some extent, which is not at all what you’re meaning to express! I know I’m guilty of saying it…

All right, Brainiacs, I’ll cut this off here. There are far more subtle differences I could delve into that would really make your head explode, but I don’t reckon they’d be the most immediate to jump out at you in your day-to-day interactions, if they went by noticed at all. You’ll find after relocating to London that you’ll inadvertently pick up some of the local dialect by virtue of being submerged in the culture, but don’t worry if not—we all still manage to understand each other here :).