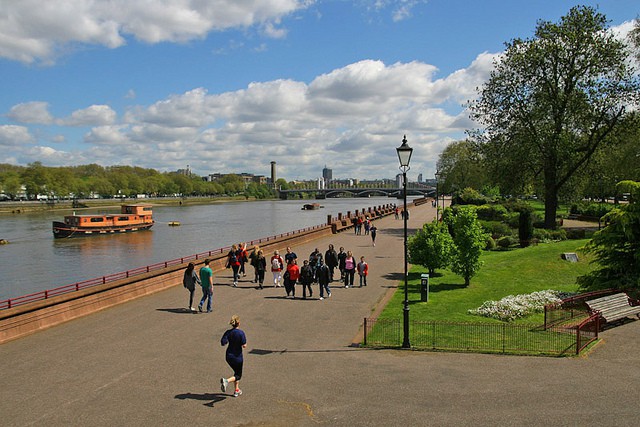 There’s no way to say enough about the transformation that this tight knit and hip community has undergone with all the millions of pounds invested in removing the industrial remnants of the area. However, more billion’s are being spent to revitalize the area surrounding the Power Station with a plan for thousands of Battersea Rentals and new homes to bring the young professionals and new families all the housing options they will require. Although the area is a great spot for those who like to cut loose after work, or for the weekend warriors, with clubs and pubs abound; it’s the young couples just starting families that are flocking to the area and causing fairly affordable neighborhood to become ever more popular.

For the childless young professionals that live in Battersea rentals, the short commute to central London is a breeze. It’s such an upbeat, funky, hip, and culture rich place that it’s not hard to imagine why it continues to grow in popularity. The Battersea rentals market is fairly large and planned expansions will put in new developments of hundreds of new apartments and flats to rent. Currently, the favored spots seem to be flats in the Battersea Rise and Northcote Road districts near Clapham Junction station. There are a great many shares in the area, right up through 4 and 5 bedroom houses to let. The council tax is one of the cheapest in London, and the school choices are quite nice.

The architecture in the area isn’t all new builds just yet, though. Queen Anne style mansion blocks, homes, and cottages. Also available are Victorian Villas, Edwardian homes and flats and terraces near ad off Battersea Park and riverside apartments lining Vauxhall to Wandsworth. A four bedroom Battersea rental house will be affordable, and an additional bedroom and better location can be had for another thousand pounds. However, for couples needing only 2 bedrooms there are a great many choices. Battersea flat rentals vary in size, but the bulk of the flat Battersea rentals are two and three bedrooms and cost an average of mid to high £2,000s.

One of the most defining features of the tight-knit community of up and comers and young families are the Northcote Road Market in Battersea, selling meat, cheese, fruits, vegetables, flowers, clothes, art, and antiques. Another great shopping destination is Lavender Hill that has unique and fashionably forward choices in art, clothes and home goods. The major department stores are Marks & Spencer and Debenhams, but if you’re looking for elaborate and fancy children’s clothing stores definitely don’t miss Northcote Road’s shopping district.

With over ten million in improvements in the Battersea area in the last ten years there has grown to be a number of great restaurants, bars, and pubs. So while we can recommend the current choices, the number of selections will increase ten-fold with the new high street. For good gathering and meeting spots within walking distance to the Imperial Wharf train, you can head to Battersea Square on the current high street between Westbridge Rd and Shuttleworth. Local spots in the area to eat are Mazar Restaurant, Woodman, Queenswood, and Zocalo.

If you are more on the Clapham Junction Station side than check out Suburb SW11 Bar & Dining; they feature a wicked good Moscow Mule and other favorite spirits during Happy Hour 6 days a week, and the tapas sampling is phenomenal. They feature everything from fondue to bottomless brunch on the weekends. Other area menus worth a look are The Schoolhouse and Palace Spice Battersea; yet a stroll up either Northcote Rode or Battersea Rise will show you why the area is so popular with the younger professionals. Bars and pubs spill over with people all summer long, and the nightlife in the area is renowned. For more subtle activities there is always a comedy show on the Battersea Barge, Recumbent rentals and the famed avant-garde Battersea Arts Centre. For things to do with the kids there is Battersea Park Cinemas; Go Ape Battersea; and the Battersea Children’s Zoo.

Actually Battersea has been famous for its rail yards and commuter trains for hundreds of years, with up to 2,000 trains a day passing through town. The Northern Line extension is planned which will add two additional tube stations in Battersea and Nine Elms. The railway is the hub of travel in Battersea and Clapham Junction can have you to Waterloo or Victoria in under 10 minutes. Daily multiple trains are available throughout London, Brighton, and other southern coastal areas.

The Overground will take you anywhere in West London, the Docklands, South London, East London, Islington, and Highbury. Trains you board in Battersea Park can have you to Victoria in 5 minutes, and the Queenstown Road trains will be only a 7-minute ride to Waterloo. The Bus network is extensive and for those of a higher budget, there’s even a heliport.

The Park by the same name, Battersea Park is one of the most active sports parks in London. The plethora of sports to choose from includes all weather pitches (fields for hockey and amateur football-soccer); boating; bowls; cricket; cycling; fishing; horseback riding; running; sports field; tennis; trim track; and walk for life trail. All weather pitches offer year-round tournament play and the surface was recently redone to maintain the best playing surface.

Battersea Park also offers art in the Pump House Gallery and Sculptures including the famous Brown Dog Statue and 8 other sculptures. The flora and fauna are worth exploring here and is a favorite of arborists and bird watchers, featuring its own aviary. The Gardens are spectacular with The Rosery, Thrive, Winter Garden, Russell Page Garden, Sub-Tropical Garden and the Old English Garden. Naturally, the most representative of the structures of the park is the Peace Pagoda, followed by the Cascades, various war memorials, and the Rustic Bridge. Battersea Park also offers various parades throughout the year, and the walk along the waterfront is a favorite of all park attendees.