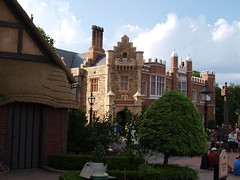 Visiting home after moving to London has always been a treat for me, and a trip to DisneyWorld is the ultimate! Not only has this vacation reunited me with my family and childhood joys, but it brought me back to the UK as only Disney could do so well…

The other week, I shared a link to AllEars.net that described the inspiration for Epcot’s UK pavilion. Now en route back to Chicago before I fly back to London on Monday, I’ve already visited the UK pavilion myself and can report on what it got right. First of all, it was pouring the day I went there, so tick one box for UK authenticity! 😉 Because of the rain, the Rose & Crown pub there was standing-room-only with adults seeking dry shelter and warm ales—basically, it looked like 5:00pm in a London pub on any given weeknight, so tick another box! I would have loved to have had a pint there myself, but it was just too crowded, so we milled around inside the shops instead. The tea shop carried assorted Twinings teas, pots, cups, and saucers as well as digestive biscuits, shortbread, and those Jammie Dodgers cookies that creep me out so much with their demented monkeys in the UK ads. There was also cute apparel sporting the Union Jack or Princess Diana tartan and a little room of Irish jewelry (which the spell-check on my UK computer is now reminding me is spelled “jewellery” in British English) dominated by Celtic patterns. It was at this point that I noted the UK pavilion should clarify somewhere that Northern Ireland is, indeed, part of the United Kingdom whereas the Republic of Ireland is NOT (see my earlier blog series, “Relocation UK: The LESS Lazy Expat’s Way to Understand UK vs. Great Britain”—which followed on my utterly lazy way—for clarification on that).

Across the way was a shop with sportier merchandise, including Chelsea and Liverpool football jerseys and rugby balls, and its interior was decorated with the beam-lined vaulted ceilings, flags, stained glass, and armor you’ll often see inside British palaces and stately homes but not necessarily your impending London apartment. 🙂 The adjacent toy shop was cute with all its Paddington Bears, Winnie the Poohs, and Mary Poppins books (Miss Poppins was there in the flesh for photo opportunities, with heels together and toes wide apart per her signature stance), but they didn’t carry the modern British cartoons like Peppa Pig and Chuggington, which I’m always running to Hamley’s toy store on Regent Street to purchase and bring back home for my niece and nephews (they now air those shows in the States but apparently don’t sell the merchandise there yet). And, of course, there was Beatles paraphernalia, but I was glad to hear the new British band there plays covers of other greats, as, legendary as the Beatles are, there is obviously much more to the past and present British music scene. Unfortunately, I wasn’t able to catch more than The Police’s “Message in a Bottle” to hear what variety they may play, but, hey, if you can only get one song, that’s a classic. Not that I wasn’t equally psyched (in a dorky, nostalgic and mocking way) to hear Billy Ocean himself singing “Caribbean Queen” over in the American pavilion…(For real! And from far away I thought he looked like Danny Glover’s character in The Royal Tenenbaums with his white hair and blue suit, but I digress…)

In any case, soon enough I’ll be back in London and writing from a more local standpoint, but I thought it would be fun to share what bits of the Brits we’re exposed to here in America and how accurate a reflection that is on the actual culture. I think the UK pavilion suffices as a darling snapshot of Britain, but lucky you and me who get to actually relocate to London and learn much, much more about it first-hand. Cheers!