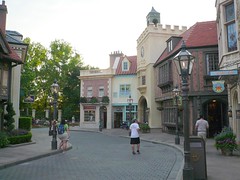 Having made the relocation to London myself, a normal feature of life now is quarterly visits back home. So, that’s right, this means I’m currently writing to you while sitting Stateside, temporarily in my sweet-home Chicago before embarking on an epic road-trip of Clark Griswald proportions (well, hopefully not that extreme) with my parents to Orlando! It’s the ten-year anniversary of when my family started going to Disneyworld together again with the next generation. In 2001, there were four grandkids, and in 2011 we’ve doubled that. I have yet to contribute my share, but I sure do enjoy seeing the Disney magic through the eyes of my nieces and nephews. 🙂

But in traveling to the Magic Kingdom, I shall not be leaving the United Kingdom behind! You see, of the many attractions I’m most looking forward to (the Haunted Mansion and Pirates of Carribbean being my life-long non-negotiables), the UK pavilion in Epcot’s World Showcase has me giddy as a schoolgirl. Which is really funny considering I live in the real-deal…I don’t know, it holds the childhood fascination of dollhouses, I guess…there’s something about life in miniature that is so darn cute. And I suppose it’s because it presents such an idealized version of England, stripping away the urban inevitabilities of London and depressing English towns like Slough (the setting of the UK’s The Office), which challenge the preconceptions of quintessential Britain to be found in well-preserved locales like the Cotswolds and more obscure villages. Regardless of the wear-and-tear of life and time, London (and the UK in general) continue to enchant me every day, so maybe I’m just excited about the pavilion because it means I can get my dose of it while in the USA.

For those who haven’t been to Disney’s Epcot park, the World Showcase is an ideal visit for travelers and non-travelers alike. It’s a chance to explore parts of the world you’ve never been to, and even the seasoned traveler like moi has a heightened sense of appreciation for the authenticity conveyed. Much research went into the architecture, food, and entertainment of this microcosm of the world, and the employees that work there are actually from the respective nations they represent. It’s a “Best-of” depiction of these countries and especially fun during this time of year when the Food & Wine Festival is underway, supplementing the countries’ high-quality restaurants with additional national cuisine.

As for the UK pavilion itself, there’s actually quite a lot that a person looking to visit or move to London could learn from it—it’s a preview of sorts of the various period and regional architecture you will actually encounter in England, and it certainly celebrates Britain’s tea and pub culture; just when you think that might be a stereotype we Americans love to indulge, just wait until you make the international relocation to London and see for yourself that it’s really not. The representative pub on the grounds is called the Rose & Crown. It alone is constructed of four different styles of historic English architecture, and its food will show you that British cuisine is not something to shun—I’ve been loving it ever since moving to London! I’ve also been charmed by the lovely and varied English gardens to be found thanks to horticultural talent and a damp climate conducive to fostering foliage, and this is likewise a UK feature represented at the UK pavilion.

In any case, as I anticipate toasting a pint of ale at the Rose & Crown, I’d like to refer you to an article found at AllEars.net, a site dedicated to all-things-Disney, which details the research behind the UK pavilion at Epcot. And why should a theme park be remotely relevant to you if you’re making a London relocation, not vacationing in Florida? Simply because of what I said above—when I first read this article myself, I learned a lot about the actual UK and figured you could, too! It’s a very fun and digestable way of taking such information in. (Speaking of “digestable,” I can’t wait to see what the mark-up on digestive biscuits is there when you figure in the import costs…at Marks & Spencer, you can buy them for about 80p, but Epcot ones will like run a few USD.) Anyway, here’s that article:

And just like leaving London hasn’t meant leaving the UK behind for me on this trip, moving to London won’t mean leaving behind Disney for you! Just a train ride away is Disneyland Paris, and if you’ve already made your international relocation, TODAY you may have caught Rapunzel’s induction as the 10th Disney Princess right in west London’s Kensington Gardens! If you missed it, see my previous post for info on what that was all about and why the heck it was in London:

So if you’re relocating to London, your London Relocation agent will, of course, enlighten you on all you need to know about moving to and living in London, but there’s always more to learn about its history and the types of buildings housing your fabulous new apartment or favorite local pub. For what it’s worth, hopefully the article above about Epcot’s UK pavilion can bring some * magic * into your UK relocation. 🙂