Relocation to London – The Key to Kensington 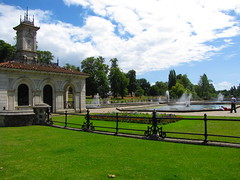 Having the services of professional London relocation agents is the best way to make sure you will have your own London apartment within a few days of moving. If you don’t have any idea of the different neighborhoods and areas of London it can be a challenge to decide on an apartment. You’ll be signing a lease agreement for at least six months to a year and you need to be confident in where you are living so that you can really settle in to London life and enjoy the city.

There are many reviews of different areas and suburb, as well as websites and fact sites about the average prices and the amenities, but how do you get a real feel of the area when you’re 3000 miles away trying to prepare for your relocation ?

Kensington is found in the Royal Borough of Kensington and Chelsea and it is one of the Notting Hill neighbors which may give you an idea as to price and lifestyle of the area. The West End of London is considered the ‘posh’ side of town and Kensington is one of the poshest areas that you could choose to live in.

If you’re moving to London and want to get away from the tourist traps, then Kensington is not for you. It is geared up from tourists and that means that you may be paying rather more than you should for a burger and fries in a local restaurant. It’s one of the neighborhoods in London where you are guaranteed to run into a celeb or two even if you’re just out having a walk.

The nicest aspect of Kensington, and the reason it is a tourist attraction in its own right is that it is absolutely breathtaking and beautiful. Gracious buildings, wider than normal streets and the magnificent Kensington Gardens right on your doorstep. This is the area of choice for international celebs and politicians, but it’s a more genteel area than an up and coming one.

Kensington does not rate highly on the community vibe scale, when you’re living with ambassadors and nobility, they don’t tend to hang out down the local pub, but there is fantastic shopping to be had on the high street and loads of trendy cafés and eateries for you sip your latte and watch the world go by.

Even if you don’t live in Kensington when you are moving here, it’s worth a visit to the park on a summer afternoon or just meander through the streets like a tourist.