Relocation to London – The Christmas Pudding 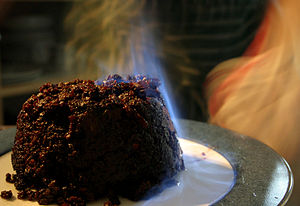 Many Americans moving to London carefully avoid and traditional British dish with ‘pudding’ in the title.  While many of the puddings consumed by the British are very different from American cuisine, there are a few that are delightful regardless of one’s familiarity with puddings or lack thereof.  No British Christmas dinner is complete without the Christmas Pudding and those Americans spending their first Christmas in London because of international relocation should consider trying their hand at their own Christmas pudding.

When many Americans moving to London think about pudding they think of a wonderful creamy children’s treat found in a box mix.  Most have never tried a real pudding or know the origins of the dish.  London is home to many puddings but Christmas pudding is perhaps one of the most famous.  A sweet dish, traditionally served ablaze, the Christmas pudding is as much a part of Christmas as the turkey in England.

Traditionally Christmas pudding is made on Stir-It-Up-Sunday, or five Sundays before Christmas, in accordance with the Church of England’s calendar.  On that Sunday the ingredients are combined and every member of the family stirs the pudding to ensure good luck.  At least thirteen ingredients are used in the pudding to represent Christ and his twelve disciples.  Often little trinkets are added to the pudding much like a King Cake during Mardi Gras.

Every family has their own special recipe for a Christmas pudding but most have the same basic ingredients.  Traditionally, beef suet is used for the base of the pudding although now many people opt for vegetarian suet for health reasons.  Added to the suet are candied fruits, dried fruit, fruit juices (lemon and orange) and spices.  Rather than baking the mixture it is boiled and then left out to ‘cure’ for several weeks, intensifying the flavor.  A day before being served the pudding is soaked in brandy. The presentation of the Christmas pudding is as important as the pudding itself.  After Christmas dinner is finished the pudding is lit on fire with the alcohol from the brandy burning off.

Although a Christmas pudding may seem exotic to many Americans moving to London it is a fun tradition that is sure to make those finding themselves in London after an international relocation feel a part of all the festivities.  The best way to combat feelings of sickness during the holidays is for those in London due to relocation jobs to try to incorporate native traditions and festivities.