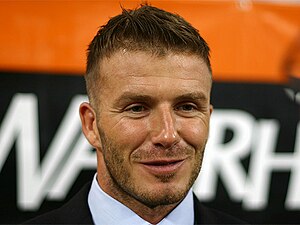 With the grand tour of America by the Royal couple of the decade is well underway, there is another ‘royal’ couple that has made news this week. If you’re moving to London then part of getting to know your new city is to learn about the absolute fascination of the British people with celebrities.

While no one really admits to reading the gossip rags, they all secretly want to know what the royals, celebrities and the ‘it’ people are doing on a daily basis. If you are settling in after your relocation to London then getting up to speed on who Posh and Becks are might be more important than asking your London relocation agents about how to open a bank account.

David and Victoria Beckham are arguably one of the most famous couples to have made the move from the UK to the US. Comfortably ensconced in the city that glitters and gleams, the couple has always been famous back in ‘Blighty’.

Many people around the world know David Beckham as one of the world’s top footballers, (that’s soccer) with the ability to be able to ‘bend’ the ball while playing, and his wife as Posh Spice, one of the members of the pop group the ‘Spice Girls’. All of Britain is talking about the latest addiction to the Beckham clan with the birth of the couples fourth child and first daughter, Harper Seven Beckham. Delivered at the cedars Sinai hospital in Los Angeles, the couple is now assured of having their visas stamped correctly!

The fascination with the celebrity culture and the foibles of the rich and famous is somewhat is a national sport in England, and the recent ‘hacking scandal’ by the News of the World shows just how far the gossip writers will go to get their story. Getting to grips with English celebs and politicians may take a while after your relocation to London, but as long as you can tell the difference between Katie Price and Jordan, you won’t be making any conversation faux pas with your new friends in London.