Relocation to London – Christmas in the City – Do Not Fear the Mince Pie! 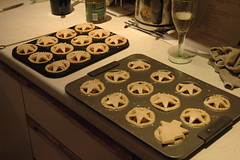 As an American moving to London I cringe when I hear mince pie mentioned because of the scary images filling my head as to what parts of which animals might be lurking inside the golden crust.  With that said I was pleasantly surprised (quite shocked actually) to learn that modern day mince pie has no meat in it at all!  Rather, it is a dessert pie filled with fruits and spices. Traditionally served during the Christmas season mince pie has been a British traditional holiday staple for centuries.  The origin of the dish is Middle Eastern and was brought over by Crusaders returning home.  The original pie was made with a combination of meats (usually lamb), fruits and spices.  Traditionally the three spices, cinnamon, cloves and nutmeg, are used to represent the gifts of the three magi to the Christ-child in the classic Bible story as well as a dough star topping the pie. Today, mince pies are still a prevalent tradition in England and after moving to London one should not be surprised to come across several around the holidays.

They are now made as individual pies and available by the dozen at bakeries and supermarkets.  Although some people still incorporate meat into the pie, the vast majority of mince pies are meatless.  For adventurous Americans moving to London there are several easy mince pie recipes to experiment with. Almost all mince pie recipes include apples, raisons, candied fruit and spices.  Some of the most popular mince pies available just about everywhere in London are Mark and Spencer and Greggs.  Being new to the city it may be tempting to go to the market and buy one such pie, but I challenge all Americans planning their relocation to London to go out on a limb and try making a pie.  If cooking is absolutely not your forte then inquire as to local, neighborhood bakeries famous for their pies. Relocation to London can be difficult especially during the holidays.  While Americans do not have to completely abandon their own holiday practices incorporating traditional British ones are a good way to settle into town.  Mince pies might have been samples while living in the states or they might be totally foreign as they were to me.  Either way, Americans should enjoy this sweet holiday treat after relocation to London.