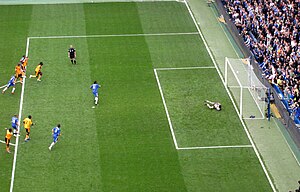 Many Americans moving to London are big football fans.  One of the hardest things to give up for many Americans after leaving the States is the Superbowl.  Those moving to London should not cry for their beloved sport back home but rather adopt England’s sport of choice – football (soccer to all us Yanks).   Like American football is in many cities in the US, football in London is a religion.  It would be in any American moving to London’s best interest to learn enough about the sport to at least enjoy a game in a pub.

There are fourteen professional football teams and eighty amateur leagues making football by far the most popular sport in the city.  Those moving here will quickly learn that allegiance to a team is mandatory.  The Premiere League is the most popular league and features the best of the best.  Within the league are twenty teams who play each other using a double round-robin system from August to May of every year.  There are a total of thirty-eight games played each season.

Within the league are twenty teams, or clubs as they’re called, which everyone moving here should learn.  They are:

The British do not expect Americans to understand or appreciate football which is good for many an expat.  Most locals are more than willing to explain the minutia of the game, the standings, and football traditions to interested Americans.

In the spirit of a New Year’s resolution those moving here should make it a top priority to plan regular visits to one’s chosen pub to watch football.  This is not only a great way to embrace the British culture, it will also undoubtedly help any expat meet friendly blokes in their new neighborhood.