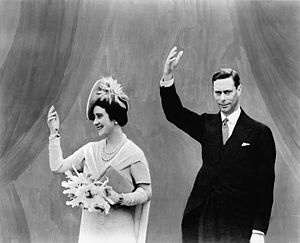 All righty, time to wrap up my brief series on The King’s Speech for those of you moving to London and interested in learning more of the city’s history, especially with all the media attention it receives lately. Yesterday, I spoke of London locations and elsewhere in the UK of note in the film, and today I’ll focus a bit more on the people.

As I’ve mentioned before, viewing the film for the first time last week prompted assorted random questions in my mind, which I’m in turn answering and sharing in this series of posts. One of these moments of curiosity surrounded how King George VI came to meet his wife. We know her best these days as the Queen Mum, which is the title conferred on a Queen consort who is the widowed mother of the reigning monarch. Thus, Queen consort  was her title when her husband was alive and well and reigning as King George VI. Prior to his coronation when he was Prince Albert, Duke of York, she was consequently the Duchess of York. But before even that, she was The Honourable Elizabeth Bowes-Lyon – of Scottish nobility but not royalty; indeed, she had been the first commoner to marry into royalty for centuries. She was born to the Scottish Lord Glamis, who eventually became the 14th Earl of Strathmore and Kinghorne, a status that conferred upon young Elizabeth the title of “Lady” and put her within high-ranking social circles. After WWI, she was a sought-after debutante and won Prince Albert’s heart. She was wary of joining the royal way of life, however, apprehensive of giving up a private life to become such a public figure, so she’d actually turned Albert down twice before finally saying “yes” and marrying him in 1923.

I was understandably quite curious about the speech therapist as well – Lionel Logue, who helped King George VI overcome his stammer. The film mentions that he is Australian (born in Adelaide, South Australia), though I hadn’t detected that in his accent – a little research has since taught me that this was a result of his studies in elocution during his youth. His initial employment included assistant-teaching and working at a gold mine, and, once he was married and settled in Perth, he began teaching elocution, acting, and public speaking, then traveled the world and helped WW1 soldiers recover from shell-shock-induced speech afflictions. Believing stammers to be caused by personal trauma rather than any permanent disability, the key ingredients to Logue’s unique method were “humour, patience, and superhuman sympathy” (from Australian Dictionary of Biography, author: Suzanne Edgar). Logue moved to London, England in 1924 and set up shop at 146 Harley Street in the London neighborhood of Paddington, near Regents Park.

If you’re relocating to London, once you’re all settled into your new London apartment rental, take yourself out on your own King’s Speech field-trip out and about town. Walk the streets its people walked, understand the lives they lived, and feel appreciative of the new history you’ll create here as you find your own voice in London. 🙂