Moving to London from America – A Reader’s Paradise 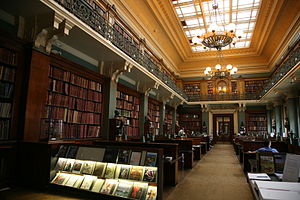 Foyles – Once listed in the Guinness Book of World Records for being the largest bookstore in terms of shelving (30 miles) this London establishment still stands at 119 Charing Cross Road in the London neighborhood of Soho.  It was originally a used textbook store when it first opened in the early twentieth century.  As the store was passed on over the generations it became more and more eclectic.  Mismanagement threatened its existence yet it remained and was renovated in the early 2000s by the current owner. Today, those moving here from America can visit Foyles to find new and used books on all subject areas as well as rare editions.

Hatchards – Anyone moving from America seeking a truly British book experience should visit Hatchards, the United Kingdom’s oldest bookstore.  First opening in 1797 on Piccadilly where it is still located this bookstore has provided London with fine books for over two centuries.  Many famous authors choose Hatchards for book signings and customers can find all kinds of new and rare publications and editions.

Waterstones – Everyone moving to London from America is aware of major bookstore chains like Barnes & Noble and Books-A-Million.  England’s version of the book mega-store is Waterstones.  With nearly three hundred retail outlets it is the largest bookstore in Europe.  Technically it owns Hatchards but due to historical importance left the store as-is.

After moving from America there is nothing more satisfying than spending an overcast winter day browsing the shelves of quintessentially British bookstores.  With something for everyone exploring the book stores is a great family experience.  Families can wander through quaint neighborhoods, grab a bite of lunch at a café, and look for hidden jewels buried deep within the stacks.  Families moving from America are sure to enjoy all the reading opportunity the great city has to offer.