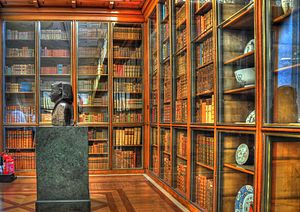 Since moving to London, I’ve made great effort to know the city through exploration and guidebooks, but one place I never intended to encounter it so much was on my own bookshelf. I select books if their summaries sound of interest, if I’ve read something else by an author that I liked, or simply if they’re a gift from someone else. That’s it. I’m not trying to read about London via fiction, but here are a few recent reads I’ve had where that clever little mistress keeps turning up:

Portobello, by Ruth Rendell – This was a Christmas gift last month from my mother-in-law, who knows that London Relocation‘s office in Notting Hill is a mere 2-minute walk from Portobello Road. The nearby streets of Westbourne Grove and Chepstow Villas also make an appearance in this modern tale of Notting Hill residents whose lives unexpectedly intersect. A character-driven novel, Portobello does well in conveying the broad socioeconomic spectrum that can be found in this popular London neighborhood.

Juliet, Naked, by Nick Hornby – I happened to pick this one up at the Durham, England rail station in anticipation of a long journey back to London. A humorous yet insightful novel by the author of High Fidelity (known best by Americans as the movie starring John Cusack and set in my hometown, Chicago, but the original book was actually set here!), most of the book is set in a tired, northeast England seaside town, though Marble Arch, Notting Hill, and Kings Cross make their appearances. Involving a mix of British and American characters and settings, it’s a decent one for the expat. My overall response to this one is, “eh,” but I did enjoy Hornby’s writing style and loved the Cusack film, so High Fidelity will probably be next on my list to experience the story in its original setting.

Snobs, by Julian Fellowes – By the same author as the Gosford Park screenplay, it’s not surprising that this novel would contain some shrewd observations of social classes in England. A middle-class American woman working in the neighborhood of Chelsea meets and marries a British earl, who whisks her away to a stately home in the countryside (his family owns estates in East Sussex and Norfolk, England). A satirical commentary on the stubborn (and increasingly unfounded) traditions of Britain’s upper classes, Snobs makes for a decent light read and, again, is one an expat relocating to London might identify with where culture clashes are concerned.

Of Human Bondage, by W. Somerset Maugham – Starting in Kent, England and journeying through Heidelberg and Paris on the Continent before settling here, this hefty read is said to be the author’s most biographical book. It follows its protagonist from childhood to adulthood, through studies and employment, dreams and realities as he engages in a downward spiral of a love affair. I had picked this one up along with Snobs on a table of employee recommendations at London’s bookstore chain, Waterstones. Not for those seeking a quick read nor fast-paced action; I, on the other hand, prefer literary fiction, so while this classic isn’t topping my list of favorites, it was a satisfying read into a fully developed character.

On Beauty, by Zadie Smith – Straddling the U.S. and U.K. like Juliet, Naked, this novel by the same author as White Teeth takes place mostly just outside Boston, but ventures in part to Highgate and Hampstead. Based on EM Forster’s Howards End, Smith follows two families in conflict on the bases of politics, morality, nationality, and class in a dramatic yet lightly humorous fashion. This one I’d actually picked up one or two years ago, just had never read until I was here! I did like it for its richly developed characters and cultural insights, though acquired a bit more of such from White Teeth, which I read back in grad school.

So that’s part of my London bookshelf. You can bet I’ll be updating on further good reads as I go along and invite you to share yours as well whether you’re making the move yourself or simply fancying the city at this point :).