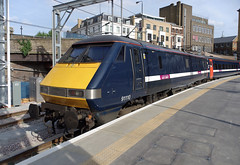 Just as soon as you have been given the all clear from your London relocation services agent, you’ll be able to start exploring the city and enjoying it as a resident and not a visitor. The exciting thing about London is it is always changing; the cityscape is continually being rebuilt and modernized while retaining a firm grasp on the historic and the noteworthy.

There is a huge amount of urban development and a sense of regeneration in the city at all times. The conflict comes in the historic nature of the city and the amount of buildings that have been persevered for hundreds of years. While some people cling on the distinctive landmarks, others are pushing forward the concept of new development. It’s a fiery debate at times and there has been a move in recent years to retain some of the most famous landmarks of London even while they are being demolished to make way for a more modern city development.

Just a month ago saw one of the most distinctive landmarks being dismantled to make way for new retail developments. Kings Cross Station, which is famous for hosting Harry Potter’s ‘Platform 9 and ¾’s’, is losing Gasholder number 8. This landmark has been a part of the cityscape for over 160 years. A steel structure to house gas works in the 1850’s has slowly been dismantled over the years to make more room for busy city life.

With the debate about development versus destruction a part of every local’s life, the owners of the area have decided to move the entire structure a little further north close to the Camley Street Nature Reserve. The older steel gasholders will be used as part of an apartment building complex and Gasholder number 8 will be the structure around a new park and event area for locals.

It is a part of the very fabric of this city that makes it so unique. The old and the new existing side by side forging a vibrant and magnificent city that everyone loves. Your relocation here is merely the first step on an adventure and a journey of a lifetime.