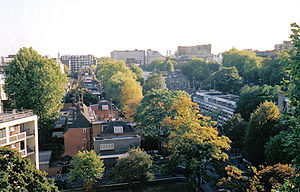 For many Americans relocating the idea of having to find a new home for a year or more is daunting.  Many relocation agencies take families on a quick tour focusing on the most popular and frequented neighborhoods for American expats.  For families who enjoy wandering off the beaten path and really want to experience this city as the locals do, consider other neighborhoods steeped in British culture and usually more reasonably priced.

This lovely West London neighborhood is in the Borough of Kensington and Chelsea and borders on Hyde Park and Kensington Gardens.  This lovely neighborhood is host to many quaint inns because of its picturesque British appeal.  Markets are within walking distance and many popular tube stations are located there as well.  Paddington and Notting Hill are just moments away making Bayswater an affordable alternative to Chelsea or Kensington.

Infamous for its train station this neighborhood had quite a bad reputation for years as it was London’s red light district.  Over the last few decades London has made a concerted effort to clean up the area and has been successful making King’s Cross a charming place to call home.  With many new apartments available those moving from America searching for neighborhoods with easy access to public transportation and some of the best nightlife the city has to offer couldn’t ask for a better location.

Of all the neighborhoods this may be one of the best for those with a literary interest.   The most popular establishment within Bloomsbury is the British Museum.  This quiet neighborhood is tucked away on Victoria Street east of Hyde Park.  Although it’s a bit more pricey than other neighborhoods it may be worth every penny if one is desiring a quiet home near one of the world’s top museums.

This is one of the largest cities in the world making finding a home intimidating to those unfamiliar with its streets.  Although relocation agents’ job is to help expats do just that it never hurts a family to do some research before house-hunting. Before dismissing neighborhoods based upon its American expat population consider some of the hidden gems.