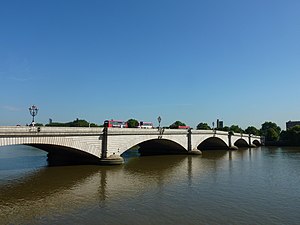 Many of those making a relocation to London first look at the city’s central neighborhoods for apartments—especially those north of the Thames—but you might want to consider the more suburban-feeling areas south of the river as well. While there are very family-friendly neighbourhoods in the southeast, too, today I’ll focus on the west because I just enjoyed an utterly splendid Sunday there!

MAKING A “SUBURBAN” RELOCATION TO LONDON

I put “suburban” in quotations as even those areas that are their own little towns outside the city’s central zones have amazingly close proximity to the iconic London we all know and love. A native of Chicago who made my own relocation four years ago, I would have had to travel much further outside that city to reach the tranquil and green spaces that London enjoys in such abundance.

Yesterday, my husband and I set off early in the morning to go cycling. I hadn’t brought my own bike when we first moved here because I didn’t know what storage options to anticipate (a wise decision, as much as I miss my Trek—our flat could have never accommodated two bikes, and they’re too easily stolen locked up outside), so I rented a Barclays bike for the first time. [FYI, the Barclays Cycle Hire Scheme is a fantastic initiative implemented here just in time for your relocation; with docking stations for these “Boris bikes” located all over London’s central zones, you can rent one for commuting to/from work or just for leisure, like I did. They unfortunately aren’t available in districts further out, such as where we ultimately ended up riding to, but are nonetheless handy for getting around central London if you’re willing to brave the traffic!]

Anyway, Boris Bike-n-me went our merry way south into Fulham and Parsons Green and then across the Putney Bridge into—you guessed it—Putney and further on to Richmond Park. Richmond Park is a massive 2,400-acre park that’s home to over 600 deer and sees plenty of cyclists in the early morning. Just adjacent are the riverside towns of Twickenham and Richmond, and as my husband and I walked our bikes along Richmond’s riverwalk and stopped there for some coffee, we watched the crew boats and row boats glide past and marvelled not only at how much it reminded us of the far, far-west Chicago suburb I used to live in, but also that this English equivalent was still within the bounds of Greater London. Putney, too, is a green and leafy area with parks and recreational grounds that leave you pinching yourself that you’re only a 20-30 minute tube ride from Big Ben or Buckingham Palace.

And after our peaceful journey through wooded nature trails taking us past Kew Gardens and Mortlake, we found ourselves crossing Hammersmith Bridge. But before we were ready to return to civilization as we normally know it, we took a pleasant diversion along the riverfront there and enjoyed a pint in the last original alleyway of the old Hammersmith village. Standing on the outdoor terrace of the Dove pub, we watched the sailboats tack and jibe along the Thames, again feeling more like we were standing in a small fishing town in Devon or Cornwall than in London (even though the traffic and bustle of Hammersmith’s major business and shopping center lay just beyond). Finally, cycling back through Fulham, we rode through a cute little park filled with young families, then past Fulham FC’s home in Craven Cottage, a small-scale football stadium of the 19th century that evoked a high school field more than a professional football club, which just added to the suburban and family-friendly feel of this entire southwest region.

A RELOCATION TO LONDON FOR NON-CITY TYPES

If you’re having to make a relocation for a job opportunity but not wanting to live in an urban environment (nor too far from your office), rest assured a large amount of London doesn’t feel like a city. Even central neighbourhoods enjoy tree-lined streets, green garden squares, and large parks interspersed amongst charming Victorian terraces and mews homes—in other words, it’s not all skyscrapers, high-rise apartment buildings, and graffiti-coated concrete. The British greatly value a balanced lifestyle of work and play, the aesthetics of period and modern architecture, and sipping a pint or cuppa within cozy interiors or briskly walking in Wellies through the fresh air of the green outdoors.

For one of the most cosmopolitan cities in the world, London also embraces its rural roots and remaining natural environs, rendering a relocation to London the happiest of mediums you could enjoy.