After Searching London Flats – Get Out and Tour the Town 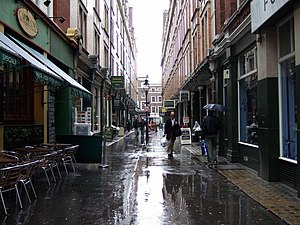 Now that you’ve spent quite a good amount of time exploring flats on foot (and hopefully found one) it’s time to explore sites without the pressure and stress. With spring beginning to bloom all around the great city of London there are several walking tours around town perfect for the new Londoner to enjoy after the hunt for your flat is over.

What American doesn’t come to London with visions of the Harry and the gang sipping butter beer and whispering about he who shall not be named.  Begin by traveling the same roads as Harry himself on this two and a half hour walking tour.  Led by a Harry Potter expert guests travel to Diagon Alley, the entrance to the Leaky Cauldron and get to visit the infamous Platform 9 ¾ where Hogwarts students catch their train.  Along the way the tour guide share movie trivia as well as J.K. Rowlings’ inspirations for the film.

This three hour walking tour not only covers Jack the Ripper’s most frequent haunts but also some of London’s most haunted locations.  Some of the places visited with be the Theatre Drury Lane, the most haunted theatre, Sweeny Todd’s home on Fleet Street, and a trip to Whitechapel.  Once in Whitechapel those on the tour can walk the alleys and streets where Jack the Ripper prowled and eventually chose his victims.

Art enthusiasts can take advantage of all the British Museum has to offer with a private three and a half hour tour led by an art historian.  The tour begins at the British Museum, one of the world’s best collections of art, sculpture and architectural ruins from around the globe.  After the museum a trip to Sir John Soane’s Museum will challenge the mind.  This eccentric architect left his home and amazing art collection to his home country.  With art historian in hand those on the private tour can experience an intimate exploration of two of London’s best museums.

Moving can be a stressful time for anyone.   With all the forms to complete, offices to visits and flats to see it is easy to wonder if you will ever have time to relax and just enjoy the sites. Although it takes a little time searching for your perfect flat, finding it and then moving squeezing just a bit more time out of your hectic schedule to tour the city on a walking tour is well worth it.