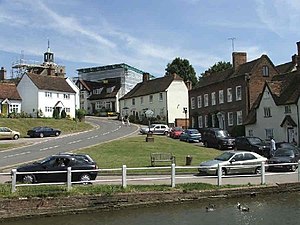 One village guaranteed to satisfy even the pickiest American tired of searching neighborhoods is Finchingfield in Essex.  Finchingfield is the most photographed English village as it is the epitome of British county charm.  With a duck pond, pubs, a village inn and country homes dotting the countryside this village is sure to satisfy all Americans’ desires to live in the country.

Essex is not considered part of London and Finchingfield is definitely not one part of neighborhoods but to most Americans the forty minutes drive between the two is pittance.  Many Americans are used to commuting well over an hour between work and home making the drive between London and Finchingfield relatively short.  Those determined to have a vehicle while living here should truly consider this beautiful small village.

The village is small and housing prices can be rather high compared to some neighborhoods, but with so many amenities the city does not offer it is hard to pass by.  Land is plentiful in Finchingfield and whether one owns one acre or twenty acres sheep, cows and chickens can be enjoyed at almost every turn.

Before throwing one’s hand in the air in defeat after countless searches of neighborhoods Americans making the move should look outside the city boundaries at the countryside. Although forty miles to a local is a world away to many Americans it is right next door.  Finchingfield is, by far, one of the most beautiful places in England and American family searching for the perfect quaint home outside of the hustle and bustle of neighborhoods should give Finchingfield a shot.