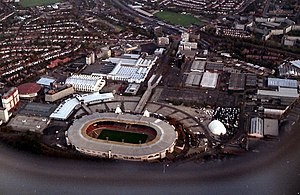 Wembley in London was one of many London neighborhoods originally created to encourage locals to travel to the far reaches of London via the new transportation system of the late nineteenth century. Located in the West End of London Wembley was known far and wide for Wembley Stadium, a lavish and exhilarating home to football and exhibitions from the day it opened in the early twentieth century.  As time went on the building began to need repairs and without money to make improvements the structure, and the once favorite of London neighborhoods fell into disrepair.

In an effort to restore not only Wembley Stadium but also the local economy Quintain, a UK property company, bought the stadium along with an impressive amount of land surrounding it.  Their dream was to recreate Wembley as a modern city known as being one of the finest London neighborhoods with a vibrant soul-centered around the stadium.

Beginning at the turn of the millennium Quintain began its massive renovation crusade by redesigning the stadium and creating a Wembley arena across the way from it.  The arena opened in 2007 to a huge crowd thus accomplishing the first goal of Quintain – to breathe life back into Wembley.

Since then over five hundred homes have been built and dozens of retail shops in Wembley City with many more planned.  Families are invited to live in a modern city with every convenience and amenity right outside their door.  Future plans include a second phase and student housing along with a hotel and designer outlet.  A 350,000 square foot ‘leisure hub’ is in the works as well making life in Wembley City nearly perfect.

As a planned community Wembley City is unique in that all types of individuals and families are not only welcome but encouraged to live there.  A purposeful component of the development has been diversity in housing.  By the time Wembley City is complete, there will be a complex housing 660 bedrooms for students, flats of varying sizes for rent along with duplex homes ranging in size from one to three bedrooms.

When moving families and individuals should strongly consider Wembley City as a possibility.  As neighborhoods go it is conveniently located to the business district by Tube or rail and offers modern amenities many neighborhoods do not.