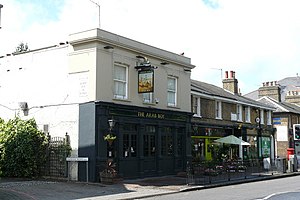 Families looking for the best London neighborhoods to raise a family should try and find flats in the charming village of Putney. Located in just across the Thames from Fulham this lovely neighborhood is quite popular with young professionals and families yet still remains able to stay affordable.  Although its nightlife isn’t as rowdy or wild as other London neighborhoods it has a good selection of pubs, clubs and taverns.  If a little longer commute is worth a home in a great neighborhood with plenty of green space Putney is the perfect choice.

No one quite knows how Putney flats have managed to stay so reasonably priced while the rest of London flats have ballooned in price.  Nonetheless your money will go a lot further in Putney and with a largely professional lot of dwellers safety concerns are minimum.  For singles looking for the quiet atmosphere of a village yet still long for close proximity to the city center Putney delivers.  House shares in Putney are among the most reasonably priced in all of London.

Overall Putney is still mostly comprised of professional white Brits but that is slowly changing.  There have been an influx of citizens moving into Putney from South Africa and Southeast Asia as evidenced by an increased presence of Thai restaurants and groceries as well as noticeable presence of other nationalities in pubs when football games air.  Although it’s not as diverse as other London neighborhoods the blend is nice and everyone appears to get along.

Surprisingly, there is quite a bit to do in Putney after the work day is over and on the weekends.  Some of the more famous pubs are The Fox, known for its coverage of sporting events with its multitude of large screen TVs, Redback Tavern, a favorite Aussie and Kiwi hangout, and the Arab Boy, a Putney original that offers the classic no-nonsense British pub experience.  For those looking to dance The Fez is the dance club of choice. While London neighborhoods can be hard to define Putney is relatively easy – a great place to raise a family.  If you are willing to spend a little longer getting to and from work living in Putney is one of the best choices you can make.  Between the well-priced flats, green space, entertainment and village like feel, Putney is truly one of the finest neighborhoods.