Welcome back to our Sunday British history lesson!  Last week, I killed off Edward the Confessor before explaining much of the dynamics of his reign—I’d wanted to focus on his religious convictions that resulted in his sainthood and Westminster Abbey—so allow me to backtrack on that this week.

As of the time Edward returns to England to rule (1042), though he is King, the Earl of Wessex, Godwin, is also a dominant ruler of England.  Edward marries Godwin’s daughter in 1045, so you’d think they’d get on swimmingly, but alas, no.  Edward has gotten on Godwin’s s— list for introducing some of his Norman friends to the English court (Edward had lived in Normandy, after all, after his exile in 1013). 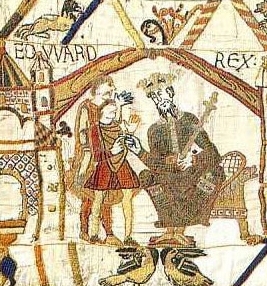 Leofric, Earl of Mercia, isn’t too thrilled about this either.  A third powerful noble at this time is Siward, Earl of Northumbria.

Ill-will between Edward and Godwin is sealed when Edward appoints the Norman bishop of London to be the archbishop of Canterbury, choosing him over the man Godwin supported.  The s— (my goodness, second time I’ve had to censor myself in this post; what’s with me today?!) really hits the fan when Godwin refuses to punish the townspeople responsible for a riot in Dover against Edward’s noble kinsman.  Leofric and Siward have Edward’s back on this issue, so Godwin is exiled in 1051.  Nonetheless, Godwin and his sons return the following year prepared to wage war; under the pressure of the other noblemen to come to terms rather than incite civil war, Edward returns Godwin’s lands to him, and some of his Norman favorites are outlawed in turn.

Otherwise, a majority of Edward’s reign can be characterized as one of peace and prosperity.

Godwin soon dies in 1053, after which his son Harold proceeds to raid Wales and negotiate with Northumbrian rivals.  As a result of these successes, Edward names Harold his successor upon his death in 1066.