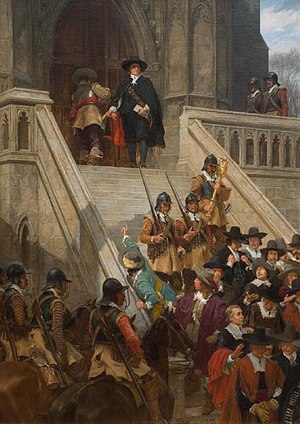 We’re back with another installment of our Weekend Warrior Sunday series in case you’re making an international relocation to London and as interested in learning its past as you are finding that ideal London apartment. Last weekend, we learned how Oliver Cromwell came to help overthrow the monarchy and himself become not King but Lord Protector over the land.

In the time leading to when Cromwell adopts this title in 1657, he has made certain strides. He has put an end to wars against Portugal and Holland by 1654, and, by 1658, his alliance with France leads to victory over Spain at the Battle of the Dunes. From a religious standpoint, he has established Puritanism, restructured the Church, and readmitted Jews into his territory, overall demonstrating a higher level of religious tolerance than the nation has previously seen.

With the good always seems to come the bad, however. The wars against the Dutch were costly, as is maintaining a standard army in general—let’s face it: financially, the government at this point is strapped. With the ineffectiveness of the different Parliaments formed during this period of England’s history, it seems the Commonwealth is not proving as successful a solution as hoped. Inconsistencies have emerged as Cromwell tries to please everyone and as a result satisfies no one; some aspects of the “new” constitution are therefore perhaps not as progressive as hoped as government struggles to reconcile implementation of the new with the old. As historian Lacey Baldwin Smith put it (far better than I):

“When Commons was purged out of existence by a military force of its own creation, the country learned a profound, if bitter, lesson: Parliament could no more exist without the crown than the crown without Parliament. The ancient constitution had never been King and Parliament but King in Parliament; when one element of that mystical nion was destroyed, the other ultimately perished.”

At any rate, Oliver Cromwell dies in 1658, leaving his son Richard to succeed him. Ah, but it wouldn’t be proper British history if there isn’t a morbid spin on this tale…we’ll delve into that chronologically next week as we see how Richard Cromwell’s reign goes. In the meantime, let’s just say, “posthumous execution.” Bleh.