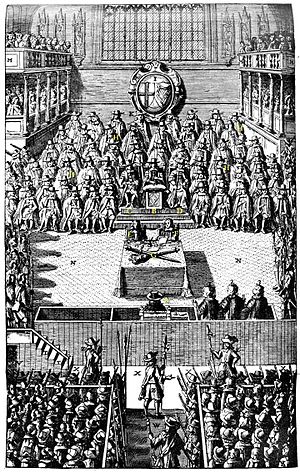 The trial of Charles I, King of England – London Relocation Services – Image via Wikipedia

Welcome back, Weekend Warriors-o-mine, and thanks for taking a break from your international relocation preparations to get your weekly dose of British history. It’s good to know some background on your new country if you’re moving to London, no? Two Sundays ago, I’d introduced King Charles I, King of England, Scotland, and Ireland, and we had left him in a bit of a bind.

Well, it only gets worse for him. He’s been ruling on his own for about a decade now after dissing Parliament and the nobility. He’s made mistakes before, but the real doozy is when he tries to enforce a new prayer book on the Scots. They aren’t having it. Rebellion ensues, and Charles I‘s 11 years of personal rule end when he has no choice but to summon Parliament for the funds necessary to fight. Yet, due to disagreement over adequate funding, Charles tries to arrest five members of Parliament. The disputes over supremacy come to a head in 1642 when Charles I raises the royal standard against Parliament in Nottingham in 1642, and civil war breaks out.

Two factions emerge: the Cavaliers, in support of the monarchy, and the Roundheads, in support of Parliament. The Cavaliers are backed financially by peasantry and Episcopalian nobility, whereas the Roundheads are backed by Puritanical tradesmen and the growing middle class—and from the more prosperous provinces, no less, so they have a significant advantage in terms of funding and population. Oliver Cromwell leads the charge of the New Model Army on behalf of the Roundheads, and they defeat the Cavaliers handily in 1645. Charles I surrenders to the Scots the following year and is handed over to Parliament, but he then escapes to the Isle of Wight, which sparks a “Second Civil War”; this lasts less than a year, brought to an end by another Cromwell victory.

Cromwell and fellow radical members of Parliament feel peace will never exist so long as the King lives, so Charles is tried for treason in 1648 and executed in 1649. England is now on its way to becoming a republic… Join me next time, and good luck with your London relocation planning in the meantime!

Related London sightseeing: The Banqueting House on Whitehall in London, where King Charles I was executed on 30 January 1649.