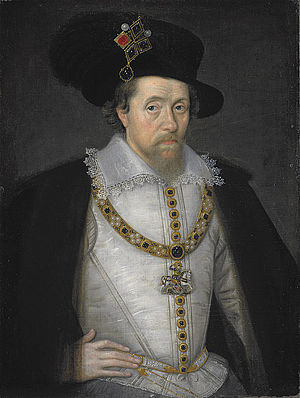 If you’re making the relocation to London UK, it’s always good to know a little somethin’-somethin’ about the vast and varied history here. The British monarchy has shaped the political and cultural landscape of London and the UK at large for centuries, which makes for a whole lotta info to swallow. That’s why I carry on the Weekend Warrior Sunday series here, focused on London’s beginnings and the leaders that have helped make it what it is today. Last week, I wrapped up a three-part series on Elizabeth I. Today, we’ll meet her successor, King James I.

The year is 1603 when James I ascends the English throne and begins the Stuart line of rule in England. He is the son of Mary Queen of Scots, who was Elizabeth I’s cousin and executed by the Queen’s orders. By that time he is already the King of Scotland (under the name of James VI), so this joint kingship makes for the joint kingdom of Great Britain. But let’s go a little further back in time…

James is the son of Mary Queen of Scots’s second husband, who was murdered in 1567. Later that year, the undesirable affairs surrounding Mary’s reign pressure her into abdicating her throne to the young James, who is only one year old at that time. Rough year for Mary, ay? It only gets worse for that babe twenty years later… Anyway, as James is obviously too young, a series of regents man the fort until James is of age to rule as King of Scotland. James’s right to rule as King of England comes by virtue of being a great-grandchild of Margaret Tudor, Henry VII‘s daughter. As his cousin Queen Elizabeth has no children of her own, she names James as her heir to the English throne.

Making the jump from Scottish ruler to English ruler is not so easy, however. No matter the leadership experience James brings to the table, there are inevitably going to be tensions surrounding his reign due to the tensions that have surrounded Scotland and England, Catholics and Protestants, Episcopals and Puritans. His personal perspectives add to the conflict, particularly his old-school belief in monarchical power that leads him to disregard the sentiments of Parliament and English nobility. Religious issues really come to a head in 1605 when a group of Catholic conspirators (including the infamous Guy Fawkes, who is annually burned in effigy on November 5th—known as both Guy Fawkes Day and Bonfire Night—and paid homage to in the film V for Vendetta) attempt to assassinate the king by blowing up the House of Lords.

Join me next Sunday to hear how this turns out, in addition to other significant religious developments to come about during James I’s reign. In the meantime, if you have any questions related to present-day UK in relation to your upcoming relocation to London, don’t hesitate to ask one of our London Relocation agents!