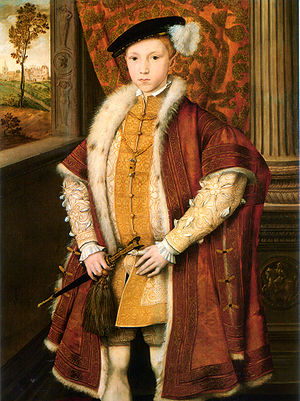 Welcome back, Weekend Warriors—I trust all is going well with your international relocation plans? If not, please do call one of our London Relocation agents if our London relocation services may be of help. But to get on with our weekly British history lesson in case it’s of interest when you make your London move, last week I finished a 3-part series on King Henry VIII. Today, we’ll meet his only son and male heir, Edward VI. As we learned a couple weeks ago, Edward VI is born to Jane Seymour, one of the wives Henry VIII actually seems to care for. Sadly, she does not survive her son’s birth, but she does bring her husband great happiness in finally delivering a male heir to carry on the House of Tudor’s royal line. Edward is only nine years old when he becomes King of England in 1547, and he is rather sickly in body though strong in mind and faith. Prior to his death, Henry VIII had deemed that a council of regency would rule on behalf of his young son, but Edward VI‘s uncle, Edward Seymour (Duke of Somerset), thwarts that when the time actually comes—he instead installs himself as Edward’s protector. Together with the Archbishop of Canterbury and the pious young king, Seymour works to secure England as an officially Protestant state, issuing the Book of Common Prayer in 1549 to lay out the new mode of worship, a handbook that is further enforced by an Act of Uniformity.

The peasantry isn’t having it. They revolt against the prayer book and socioeconomic injustices. France also declares war against England at this time. John Dudley, Earl of Warwick, enters stage left to help suppress the rebellion and take down Edward Seymour as Protector; Seymour is arrested and executed. Dudley assumes his role in duty if not title—now the Duke of Northumberland, he effectively rules England and young Edward VI’s finances. He further promotes Protestantism with a 1552 Prayer Book and new Act of Uniformity that is even more strict; church territories are confiscated and religious imagery destroyed as the new orthodoxy is rolled out. Meanwhile, Edward VI is falling ill with tuberculosis. Dudley seizes the moment by getting Edward to agree to a new order of succession that bypasses his sisters Mary (daughter of Henry VIII’s first wife, Catherine of Aragon) and Elizabeth (daughter of Henry’s second wife, Anne Boylen) by declaring them illegitimate. He agrees to giving the throne to the Duke of Northumberland’s daughter-in-law, Lady Jane Grey. After battling illness his entire short life, Edward VI dies in 1553 at just under sixteen years of age.