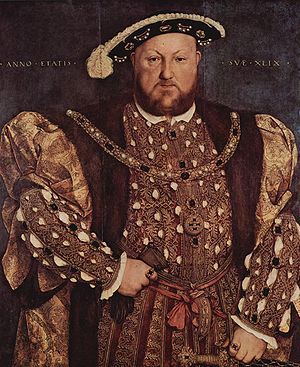 Hey there, hi there, ho there, Weekend Warriors! I hope your planning for your upcoming international relocation to London is going swimmingly and that you’re psyched for another installment of our weekend British history lesson. Last week, I introduced a monarch you might have heard of—Henry VIII, I believe? Today, let’s continue his story.

Last we saw, Catherine of Aragon has failed to give Henry VIII a male heir, so he seeks an annulment with her so he can marry the intriguing and hopefully fertile Anne Boleyn. The Pope’s refusal to grant this isn’t to deter Henry; he goes ahead and does what he wants in 1533 at the price of excommunication. At this point, let’s cue Mel Brooks: “It’s good to be the king.” Because when you’re king, you can change the law, and Henry VIII deems it high-time that he break with Rome, enstate himself as head of the Church of England, and dissolve England’s monasteries.

And is she worth it? Well…Anne gives Henry a daughter (Elizabeth I, the future Queen of England), but not the son he’d hoped for. And, Anne, quite frankly, he’s just not that into you anymore. So Henry decides to take the easy way out of marriage this time and simply have Anne convicted of adultery and treason, thereby sentenced to execution in 1536. Now that she’s out of the way, enter Jane Seymour, who does give Henry his desperately sought male heir (Edward VI) the following year. Jane, unforunately, doesn’t survive the birth, and so another of Henry VIII’s wives is laid to rest.

Next in line? Anne of Cleves in 1540, who he divorces within months. That same year, it’s Catherine Howard until 1542 when she, like Anne Boleyn, is executed for adultery and treason. The last one on the roster is Catherine Parr in 1543, who Henry sticks with until his death in 1547.

But Henry VIII’s reign is not all about the wives; he achieved much politically, so to not be remiss, I’ll continue with this king next week.

Related London sightseeing: Tower of London, where Anne Boleyn was executed, and Hampton Court Palace, where the Church of England was born in its Chapel Royal (beneath the altar of which are buried Jane Seymour’s organs, where it was believed the soul resides) and Catherine Howard’s ghost is rumored to haunt the hallway of her bedchamber.