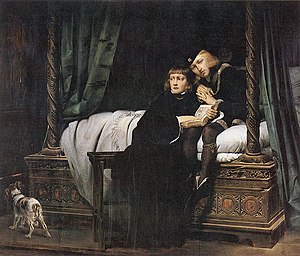 Hiya, Sunday Weekend Warriors! If you’re moving to London, please do join me as I continue in our series of British monarchs. Last week we covered the dual reign of Edward IV, and today it is with heavy heart that I speak of the very, very sad and brief reign of his son, Edward V.

When Edward IV dies in 1483, his twelve-year-old son, Edward, ascends to the throne as King Edward V. Understandably, this age is quite young to rule over a kingdom, so Edward V’s uncle Richard (the Duke of Gloucester, who had aided Edward IV in returning to the throne in 1471) is appointed protector of England in his stead until he comes of age. Richard disputes with the Woodville side of the boy’s family and gains custody of Edward V and his younger brother. As the Tower of London is not only a prison but a royal residence at this time, the boys live in the fortress in what is today known as “The Bloody Tower.” To elaborate on the intrigue surrounding this dark episode of London history, allow me to quote an excerpt from A Beefeater’s Grisly Guide to the Tower of London, written by one of the Tower’s own yeoman warders:

“And so it was on the death of Edward IV in 1483, twelve-year old Edward and his ten-year old brother Richard, Duke of York, were brought to the Tower by Richard, Duke of Gloucester, allegedly to prepare the elder boy for his coronation but, it was believed by many, to dispose of the two in order to gain the throne for himself.  He organised this by having two hit men, Sir James Tyrell and Miles Forrest, creep into their chamber during the night and ‘smother them under feather bed and pillows, kept down by force hard unto their mouths.’ Their naked bodies were then taken outside, buried at a stair foot and covered with stones.

During repairs in 1674 their bones were discovered, one body dumped on top of the other, signs of the manner of their death being visible by the bloodstains which suffused Edward’s face and the complete separation of the facial skeleton, caused by the assassin crushing the pillow down on the boy with all his weight. Their remains were then reverently deposited in an urn, which was placed in Westminster Abbey, and later, in 1933, were duly identified by eminent medical and anatomical scientists of the day.”

Now, while some may dispute whether in fact the two child skeletons found at the Tower were indeed the two princes or that they died at the hand of the Duke of Gloucester, it is nonetheless fact that the two boys were never to be seen again outside the Tower. It is also a fact that, just prior to their disappearance, Richard had swayed parliament to his side in deeming Edward IV’s marriage to Elizabeth Woodville invalid and therefore Edward V and his brother illegitimate. Undermining their claim to the throne in this way, Richard is then crowned King Richard III after Edward V had served as king only two months.

Related London sightseeing: The Bloody Tower at the Tower of London, where you can learn more details surrounding the mystery of the princes’ disappearance both on site and during a beefeater tour.