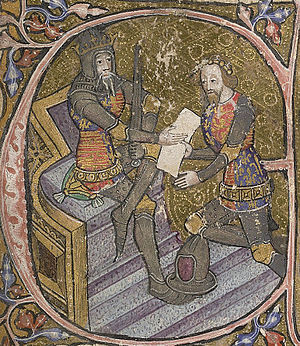 My, how the week flies…another Weekend Warrior Sunday already to give you your dose of British history as you plan your move. Last week, we met King Edward III, who seems to be an apple that’s fallen far from the tree (luckily), proving himself a more able ruler than his father, Edward II.

As mentioned previously, the battle that history would later look back on as the start of the Hundred Years’ War went on hiatus due to the bubonic plague that devastated Europe. Warfare commences again, however, in 1355 when the English invade France again. Edward III‘s oldest son, Edward (a.k.a. “The Black Prince”) is victorious in Poitiers the next year and captures the French King John. The Treaty of Bretigny is signed in 1360, at which time Edward III gives up his claim on the French crown in exchange for the region of Aquitaine, and English domination of France reaches a peak.

By 1369, however, England and France are back at war, with Edward III’s other son, John of Gaunt (Edward III himself is an old dude by now, for his day), leading the next invasion. England’s efforts prove weakened, however, which causes great setback in their previous conquests; by 1375, it has foregone many of the territories it had earlier seized, remaining with only Calais, Bordeaux, and Bayonne in its power as the Treaty of Bruges is  signed.

Though his reign was an initial success and England overall prosperous (Parliament during this time also officially split into two houses, the upper comprised of nobility and the lower comprised of the middle class), plague and war have come at a large price, a toll of both human and financial loss. So though Edward III had improved relations with the nobility, heavy taxation in his later years become another bone of contention. He has also lost his wife, Philiippa, and taken on a conniving mistress who exudes strong influence at court with the support of John of Gaunt. Even worse for him, Edward III loses his dear son, Edward, the Black Prince, to premature death and spends the short rest of his life mourning him. In 1377, King Edward III passes away, leaving the crown to his grandson, Richard.