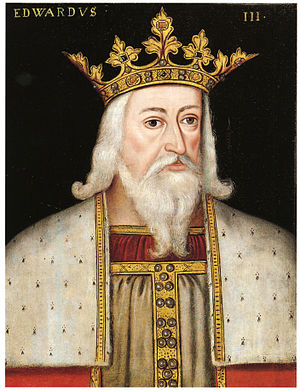 Hello there, productive Weekend Warriors prepping for your London move! If you’re thirsty for more history of England, let’s continue our climb through the vast British monarchy, shall we? Last week, we said, “See ya!” to the not-so awe-inspiring Edward II, who, in the end, was imprisoned and murdered as a consequence of his own wife’s invasion of England with her lover.

Oh, Isabella. Your cheatin’ heart. You and Robert Mortimer are getting on just swimmingly, aren’t you? Well, lady, your son with Edward II—Edward III—is now heir to the throne at the young age of fourteen, and though you and Mortimer rule in his stead for three years, woman, your kid isn’t going to take this lying down (the way you seem to have taken so much, Isabella…oh dear, did I write that out loud?!). At any rate, in 1330, Edward III revolts and assumes his authority—he has Mortimer executed and his mother banished. By this time, Edward III is married and on his way to producing twelve, count ’em, twelve children, nine of which actually survive into adulthood (which is amazing for back then).

Also by this time, the French have entered the crosshairs in light of  their alliance with Scotland and dispute over the French crown, on which our own King Edward III of England lays claim. Thus commences the Hundred Years’ War between the Houses of Valois and Plantagenet (to which Edward III belongs) circa 1340. England wins control of the Channel and gains its foothold on French soil in Crécy and Calais. Next to sweep the land, however, is the Black Plague, so warfare against France peters out until both sides can recover in its wake. Around this same time in 1348, Edward III establishes the Order of the Garter, a fellowship of knights.

Join me next week, Warriors, for when England rises from the ashes of the Black Death and reasserts its campaigns against France. Hopefully in comparison any challenges related to your London relocation don’t seem as bad anymore. 🙂