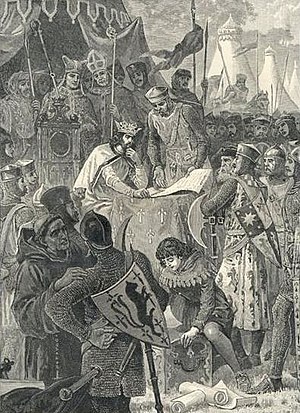 Hiya, Weekend Warriors! Thanks for joining me again for another British history tutorial so you’ll be in the know when you move to London ;). Last week, we saw Richard I (a.k.a., Richard the Lionheart) ascend to the throne.

I’d mentioned last Sunday how Richard’s brother John had been conspiring against him with Philip II of France. Although Richard had named his nephew Arthur to be his heir, when Arthur was captured by Philip II, Richard altered that to his younger bro, John. So now that Richard I has passed on due to his fatal wound in 1199, John is the new King of England.

John is a bit of a mess, if you ask me. (You didn’t ask? Oh, well then, back to the facts...) Though he’d worked in kahoots with Philip II, he creates a massive rift that leads England into war against France, and, by 1205-06, he loses substantial French territories, including Normandy. He likewise gets into conflict with the Church for not naming its preferred candidate Archbishop of Canterbury, which puts England under ecclesiastical penalty in 1207 and eventually gets John excommunicated. He does finally suck it up and appease the Pope, so they make their peace.

Meanwhile, he’s hell-bent on winning back his French territories, so to raise money for these campaigns, he levies high taxes on the nation, which brings the barons into uproar and leads to civil war. Again, nice going, John [insert sarcastic clapping here]. The barons capture our precious London in May of 1215, at which point John finally concedes. It is in June of this year, then, that he does something decent and signs the famous Magna Carta for the protection of baronial rights and limitation of royal power. This document is the first of its time that actually binds the monarchy to be ruled under law like everyone else, which paves the way for later democratic constitutions.

Rising up against this humiliating concession of power that he alleges he’d only signed under duress, John maintains civil war, so the barons call in Philip II for aid, offering his son Prince Louis the English throne. It is in the midst of the ensuing invasions that John dies in 1216.

Related London sightseeing: The original Magna Carta on display at the British Library.