Relocating to London From A to Z: Name That Prime Minister…

If you’re moving to London or simply interested in all-things-about-it, please join me as I continue with our newly started A to Z Blogging Challenge! There’s a lot about London to cover, from the logistics of relocating to the UK and finding a London apartment to sightseeing around London and understanding its culture and history better. Today, I’ll briefly address the latter aspects:

“C” is for CHURCHILL!

Why yes, of course, I believe you’re familiar with this ol’ chap. Winston Churchill is widely known for his tremendous leadership during World War II and actually served as the British Prime Minister not once, but twice: first from 1940-1945, then again from 1951-1955. A talented orator (see www.bbc.co.uk for a sample of his notable speeches), Churchill could cleverly turn a phrase (a resource like The Wit & Wisdom of Winston Churchill will show you how insightful and funny the man was). My personal favorite quotation of his is:

“If you cannot read all your books…fondle them—peer into them, let them fall open where they will, read from the first sentence that arrests the eye, set them back on the shelves with your own hands, arrange them on your own plan so that you at least know where they are. Let them be your friends; let them, at any rate, be your acquaintances.” 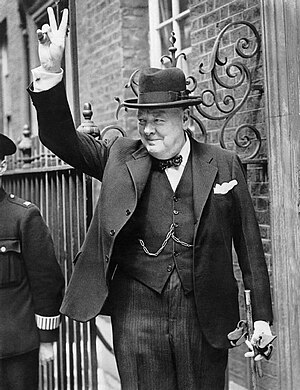 And speaking of books, Churchill was a writer of them as well; indeed, he won the Nobel Prize for Literature in 1953.

If you’re already a Churchill buff or keen to learn more about him, I cannot recommend highly enough the Churchill War Rooms. This is the actual bunker in which Churchill and his cabinet strategized during the war (with many original furnishings and maps still intact since then, including a ration of sugar found inside a desk!), and the adjacent Churchill Museum is a comprehensive and interactive journey through the man’s life, worth visiting again and again to take it all in. Nearby in Parliament Square is a nine-foot statue of Churchill looking upon Westminster, and as you walk from there along Whitehall (going toward Trafalgar Square), take a peek on your left down the famous and guarded 10 Downing Street where Churchill lived as Prime Minister.

Having lived from 1874 until 1965, Churchill is buried in Bladon, Oxfordshire, but his state funeral service was held at St. Paul’s Cathedral in London, and you can see a memorial to him inside Westminster Abbey. Another locale where I particularly like to pay homage to the great man is The Churchill Arms pub in Notting Hill. 🙂

I could go on and on here with the facts, and you could read them to your heart’s content, but the best way for history to come alive is for you to visit or move to London and walk in Winston Churchill’s footsteps as you see for yourself the city he graced and the country he saved.