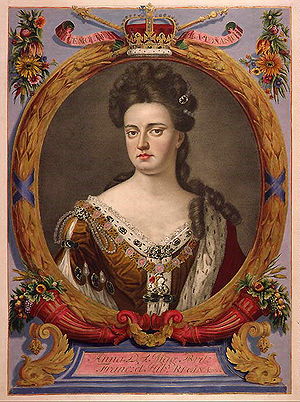 Moving to London involves a lot of planning and research. And while your immediate relocation needs will involve sorting out employment, finding the right London apartment and neighborhood for you, and perhaps getting children situated in new schools if you’re moving to London with a family, the best bit is learning more about London itself.

England is a proud nation that continues to make history with big events coming up like the Queen’s Diamond Jubilee and summer Olympics, and this British history is something the locals are proud to share with newcomers. My Sunday series here exploring the biographies of Britain’s monarchs is a little preview for you, then, if you’re moving to London and want the gist of its rich royal past.

Last Sunday, we briefly reviewed the joint reign of King William III and Queen Mary II. As they had no children, next in line to succeed is Mary’s sister and (King James II‘s daughter) Anne. As Queen Anne was born prior to James II’s conversion to Catholicism, her succession complies with Parliament’s Settlement Act of 1701. She isn’t into antagonizing Parliament anyway, but she does attend most cabinet meetings to hold her Catholic-born half-brother, James, at bay.

Moving to London – Unification and Separation

Queen Anne’s reign seems to be characterized by simultaneous coming together and breaking apart. The most significant event to transpire is the Act of Union in 1707, whereby Scotland joined England to form Great Britain—Anne is therefore the first monarch of Great Britain, with a shared Parliament, flag, and denomination of money though Scotland retains its religious, legal, and educational systems.

As for the divides moving into London and the kingdom at large, Anne’s reign sees two political parties officially develop and diverge: the Whigs and the Tories. Their opposition and fight for control over Parliament and the Queen’s favor tears Anne in two directions, as does the matter of her own heir, which pits her against her own half-brother. Anne is further embroiled in conflict when a close and long-held friendship with Sarah Churchill (wife of the Duke of Marlborough, who led England to several military victories during the War of the Spanish Succession, which began months into Anne’s reign) turns publicly sour. It seems Sarah is too confident in her position as the Queen’s favorite and becomes too big for her britches—in addition to growing overbearing with Anne, she criticizes her in public.

Moving to London – Talk to the Hand, Sarah

As a means of gaining more influence with the Queen, the Tories plant Abigail Hill into her household to win favor over Sarah. Ultimately, tensions between Anne and Sarah do indeed escalate to the point where the Queen dismisses the Duke of Marlborough of his services despite his impressive record and shuns Sarah for her new BFF, Abigail.

And so, Anne has allowed herself to be influenced by favorites and ministers, and though she’d hoped to rule over a balanced government, the Whigs and Tories alternate in dominance, the Tories winning out by the end of her reign…sort of. When Anne dies in 1714—the last monarch of the Stuart line—her named successor is Protestant prince George of Hanover, the Whig’s pick.

Who knew this could be so educational, right? Join me next week, fellow amateur historians, for more rockin’ on with the royals.

Related sightseeing: the Queen’s Closet at Kensington Palace, where Queen Anne and Sarah Churchill had a huge cat-fight pivotal to going their separate ways.