Moving to London – The Preservation of St. Pancras (Part 1) 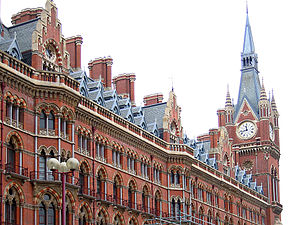 When you make a relocation to London, you don’t merely live inside your London apartment—you dwell in the city’s very history. There aren’t many London locations that don’t have an interesting history attached; I’m reminded of this every day and was last night in particular when I met fellow American expats for cocktails at the St. Pancras Renaissance Hotel. Housed in the same structure as the St. Pancras International rail station (this is where you catch the Eurostar to Paris and UK high-speed rail services), the hotel is situated conveniently next door to Kings Cross Station and just a block from the British Library, where I love to visit the manuscript room and gawk at Charlotte Brontë’s original, handwritten Jane Eyre, among other fascinating literary treasures.

St. Pancras rail station was designed by William Barlow in 1863, and construction began in 1866. The building’s most distinctive feature is its red brick Gothic Revival facade, which was designed for a competition in 1865 that called for a 150-bed hotel that would “add lustre” to the rail station. Before it was the Renaissance Hotel, it was the Midland Grand Hotel, which was designed by Sir George Gilbert Scott (after whom the present restaurant and cocktail lounge is named) and constructed from 1868-1876. All stone and brick used in its construction came from England’s Midlands.

The hotel only lasted until 1935, however; it proved too expensive to maintain, and the building’s solid foundations prevented plumbing routes that would allow for modern en suite bathrooms at the time. At this point, the facility was used as railway offices. During both WWI and WWII, St. Pancras played a significant role: it was a meeting point for troops and used to transport soldiers as well as evacuate children out of London to the countryside. The station itself was bombed during the London Blitz (three times in one month, in fact), but the strong structure remained relatively unscathed, and the railway was brought back into working order; .

Despite this history and the intricate grandeur of its facade, I’m horrified to discover that St. Pancras was nearly demolished by the British in the 1960s. The idea was to re-route St.

Pancras’s trains to the neighboring Kings Cross and build an office tower in its place. The fact that we can still enjoy the station and hotel to this day is attributed to the public outcry in 1966. Euston Station had already undergone such a hideous makeover in 1962, which helped fan the flames of protest against it happening again. The poet Sir John Betjeman was a notable figure in its preservation, and a bronze statue of him stands in the station today. (Among other artistic artifacts to be found in the station are sculptor Paul Day’s nine-foot bronze statue “The Meeting Place” and the re-constructed St. Pancras Clock at the apex of the Barlow shed.)

Join me next time for more historical and architectural tidbits on St. Pancras to further your appreciation of this London gem and hopefully encourage you to visit it as a guest, diner, or traveler when you make your international relocation to London.