In the wake of yesterday’s Tube strike fiasco (and given my recent fascination with Victorian times), I thought it might be fun to share what commuting through streets here in the 19th-century was like—perhaps it would help give perspective on how easy we still really have it these days.

Per Inside the Victorian Home:

“These streets were thronged, in a way that we have now forgotten. [….] the clerks streaming to and from work, the water carts spraying the dust, crossing sweepers keeping the worst of the mud and dung away from the pedestrians.” 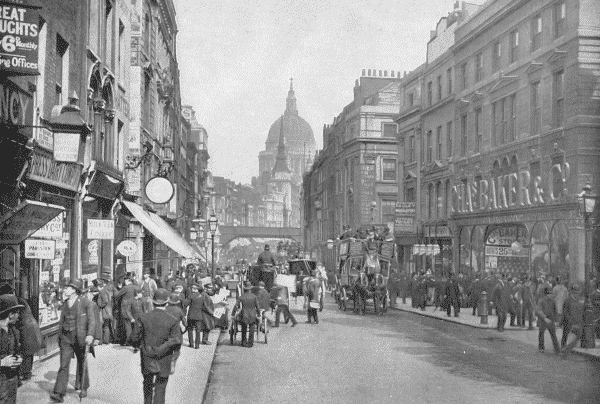 Indeed, women did not emerge much from home—aside from the fact that they were required at home to oversee all domestic duties, walking those streets in that Victorian clothing was a drag!  As one contemporary lady related:

“It was difficult to walk freely in the heavy tweed ‘walking skirts,’ which kept on catching between the knees.  Round the bottom of these skirts I had, with my own hands, sewn two and a half yards of ‘brush braid,’ to collect the worst of the mud; for they inevitably swept the roads, however carefully I might hold them up behind…Afterwards the crusted mud had to be brushed off, which might take an hour or more to do.”

Ugh!  I love walking around London and couldn’t imagine being constricted this way.  The Underground, omnibuses, railways, and trams were consequently favored by these ladies, and just like everything else in Victorian times, these modes of public transport were stratified by social class.  One still sees 1st and 2nd class coaches on the overground trains nowadays, but back then they had three classes, and even the Tube had two, and though omnibuses had only one, their times of service started after the laboring class would have already needed to be at work.  Should a poorly dressed person manage to catch a bus:

“the driver would just slow, not stop, and the would-be passengers either had to jump while the bus was in motion or had to wait for a better-tempered driver.”   – Inside the Victorian Home

Even the right-of-way of private vehicles (as dictated by official Victorian rules of the road) gave favor to the privileged.  According to What Jane Austen Ate and Charles Dickens Knew:

“Carriages painted with a coat of arms take precedence over all others, […] middle-class carriages with four horses have precedence over those with only two, the latter over cabriolets and tilburys, hired landaus over coaches, coaches over omnibuses, omnibuses over cabs, and so forth down to the trap, and even it has right of way over the cart.”

Yeesh, peer-pressure must have been brutal in those days…as were the physical conditions.  Before 1968 when stairs were introduced, the only way to sit on top of the double-deckered omnibus was to climb an iron ladder with only a strap to grab onto (women, naturally, were not expected to ride up there).  The Tube tunnels were filled with smoke from the coke-burning engines, and runaway horses and carriage accidents were common.  The railroad was a more comfortable means of travel, although not all trains had lighting or heating (instead, passengers brought their own candles and a porter would bring a metal basin filled with hot water to warm their feet—eventually gas lighting and steam heating were introduced), and toilets didn’t appear on trains until 1892!  I love this (again from What Jane Austen Ate…):

“Ladies might travel together in compartments separate from the gentlemen, for long journeys bringing chamber pots concealed in discreet baskets, while for gentleman long tubes that could be strapped along the leg under a trouser were advertised.”

Ha!  And lest we forget that all commuting throughout our city would be conducted under the blue, gray and/or brown haze of the sky—the infamous “London Fog,” as it were (not to be confused as an actual fog)—thanks to the Industrial Revolution and millions of chimneys spewing their smoke and dirt into the atmosphere.  Even better, the haze bore a pungent smell for London residents to delight in.

Just some historical food-for-thought to acquaint you with the great strides the city has made since then, rendering it a world class location of great convenience and lifestyle for you to enjoy once you move here.