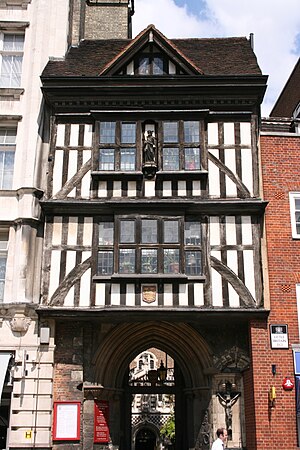 If you’re relocating to London, you’ll find relatively less expensive rent in the east-central Farringdon and Clerkenwell neighborhoods, but even if you find a London apartment elsewhere, it’s an area that merits visiting.

This general area is dotted with cool, off-the-beaten path venues for food and libations. To catalog them all would not be practical for a mere blog post, but I’ll at least highlight a few Clerkenwell joints I’ve been to personally. A classic gastropub experience can be had at The Easton. As it should at every gastropub, the food transcends the typical pub menu to offer fresh gourmet fare—they even grow their fruit and veg on their own rooftop garden!—and the ambiance is quaint and cozy. Another highly recommended gastropub near here is The Peasant, which will charm you with its dark, wooden interior and arched windows. For a more casual if not quite random atmosphere, if you’re into cycling, take that love to another level at Look Mum No Hands! With a decent amount of outdoor seating (ample bike-parking included!) when London weather is cooperative, this is a chill, intimate-sized space dedicating its decor to the bicycle and where you can even get yours repaired if need be…no kidding. And if it’s more of a cosmopolitan-meets-rustic minimalist café environment you’re seeking, I recently met some American expat friends for our regularly-scheduled Monday morning coffee at Caravan. Standing front and center at Exmouth Market, Caravan’s flavors are an international fusion, rendering even a simple brunch-time bowl of dried fruit most exotic. The Exmouth Market that surrounds it is in itself a destination where you meander a myriad of shops or choose your lunch from a couple dozen different artisan food stalls.

Speaking of markets, Farringdon’s Smithfield Market is an immense hub of meat traders—the largest and oldest, in fact, of EU-approved wholesale markets. Dating back a century and a half, Smithfield Market stands on a site that actually was the locale of a livestock market eight hundred years ago! Prior to that, it was a 12th-century recreational ground that held jousting and other tournaments—it was an ideal space for such, you see, as it was such a smooth field…hence, the original name “Smoothfield,” which later became “Smithfield.” By the 13th century, the area was also used for executions, notably that of William Wallace, who you may best recognize from Mel Gibson’s famous portrayal in the film Braveheart. A plaque commemorating the site of Wallace’s execution can be found on the exterior wall of St. Bartholomew’s Hospital.

And let’s not neglect said St. Bartholomew—this Apostle’s other prominent namesake in the area can be found through the wonky Tudor-style archway off the curving West Smithfield road. The church of St. Bartholomew the Great was originally founded toward the beginning of the 12th century. Having survived the Great Fire and Blitzkrieg, St. Bart’s draws many pilgrims for religious and secular reasons: where the latter is concerned, it is a building of architectural beauty, history (American expats, you might like this—Benjamin Franklin worked on this site as a printer in 1725!), and cinematic appearances in films such as Four Weddings and a Funeral, The Other Boleyn Girl, Shakespeare in Love, and Elizabeth: The Golden Age.

As long as I’m talking cinema, allow me to briefly segue further into the arts. If you’re in the Smithfield vicinity, you ought to pay a visit to the Barbican as well, an internationally renowned mecca of theatre, film, dance, and music. Tickets to shows are inexpensive relative to the West End. Aaand, my artist friend Charlene Lam is currently at work on a new art project commemorating the upcoming Chinese New Year—her studio is set up at Craft Central in Clerkenwell, which periodically hosts craft workshops, interior design and fashion sales and the like, so worth looking into for an artsy activity!

Hopefully this offers a little insight on a London neighborhood outside of the western ones that seem to attract more mainstream attention. If you’re looking for arts, edge, history, diversity, and cost-savings, London postcode EC is one to consider as you make your London move.