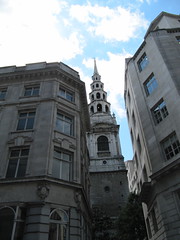 You cannot escape the history of this city if you’re going to be living in London. It is all around you. From the earliest examples of the Roman wall built two thousand years ago to the buildings that still remain from before the Great Fire of London. The massive fire that wiped out large areas of London during 1666 was not all bad for London. The fire had the effect of being able to wipe out much of the scourge that that swept across Europe for hundreds of years: The Black Death.

“A ring, a ring of roses, a pocketful of posies, a tissue, a tissue, we all fall down!”

A childhood nursery rhyme with sinister origins, while this has not been attributed directly to the Black Death, it is the most commonly accepted origin of the rhyme. Sung today by millions of children, they do not know the devastation that preceded this little ditty.

The reference to the roses is based on the rashes that appeared on the body of a person with the Bubonic plague, and the sneezing is the flue like symptoms that follow. Falling down? Well, that is death…The Black Death.

The Black Death does not just cover one period of history in the world. There have been instances bubonic plague recorded right back to the 7th century. The largest recorded epidemic was in Europe and started in the 14th century. At different time it was under control, but would always break out again in different cities and countries until the 18th century. It has been called by many different names across different countries and eras. In London it was known as the Great Plague of London and reached it height and end during the year 1666, as a result of the fire that burned most of the city.

The Black Death reached Europe in 1340 on Italian boats that were from the east. It is said to have originated in china and was carried to Europe on the fleas which were in turn carried on the rats that were found on many of the merchant ships sailing from the East.

How do you know if you’ve caught the Black Death?

There is no point in getting alarmed, there are very few modern cases of bubonic plague, but if you do develop any of these symptoms, you should probably get to a hospital sharpish!

The appearance of a rash, possibly caused by flea bites, is the first sign, and very soon after that there are swellings that develop under the armpits, in the groin area and on the neck. These swelling are filled with pus and they spread rapidly across the body. After that there is the appearance of black spots all around the infected areas which also spread across the body. Followed by fever, vomiting and death, the entire cycle takes between 5 and 7 days. Pretty grim if you consider the medical care available at the time. Antibiotics had not yet been developed, and there was little that could be done to stop the plague from spreading through the crowded and unsanitary street of London.

The Destruction of Europe and England

During the 14th century the Black Death was responsible for the deaths of nearly 200 million people. Although the plague does not last long, in England it was to keep breaking out for over 400 hundred years. At its height in 1666 it killed over 35 000 people in a few months. This is a direct result of the living conditions at the time. The streets and houses that were close together, sewage that was not disposed of and a host of social ills that affected the city. The overcrowding of London was a huge factor in the rapidly spreading Great Fire of London, which burned the plague out.

There is very little chance of a recurrence of the bubonic plague in modern times, because of the antibiotics and other drugs that have been developed, there have only been a few hundred reported cases of bubonic plague since the end of WWII.