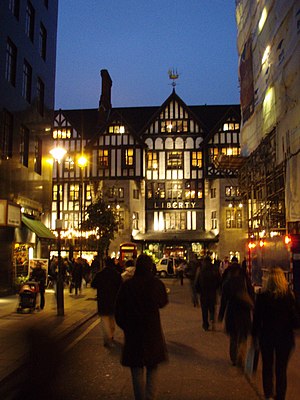 Just returned from a delightful afternoon tea with a few fellow American expats who have moved to London recently. The locale: Liberty, on Great Marlborough Street.

Set just off the main thoroughfares of West London’s bustling Oxford and Regent Streets, Liberty of London greets you with its classic English Tudor facade expanding the stretch of a full block. Don’t let its exterior fool you that it actually dates back to the 1600s—this department store building was constructed in the 1920s, when Tudor-style was making a comeback.

The Liberty store itself was founded during the Victorian era, however, by Arthur Liberty. Starting out with the space of only half a shop on Regent Street, it did not take long for the business to expand given its exotic products procured from all around the world and the high standards of quality Mr. Liberty enforced. Its original focus was interior decor, and its fashionable, patterned fabrics—for which it’s still famous—began to be purchased for apparel as well as home furnishings. By the 1880s, Liberty was designing clothing to rival Paris fashion.

Two different ships (the HMS Impregnable and HMS Hindustan) contributed their timber to the Tudor building that stands so prominently near the quaint alleyways of the Carnaby Street area. This London icon is not only a pleasure to behold from the outside, but, I think, gets even better when you step into the opulent woodwork of its surprisingly cozy interior. Despite its immense proportions, Liberty is divided into separate rooms that flank its central atriums, which gives it an intimate feel that is by no accident—Arthur Liberty aspired for his store to feel like walking through one’s home (sheesh, if ONLY my home looked like that!), an effect that showcases its textiles and dishware optimally. While I dare not ever let myself roam among the divine clothing (sticker-shock is rough on my heart), my favorite departments to explore are the books, bath goods, tea cups, furnishings, and fabrics. And if you’re a crafty one, whoooaa boy, talk about Craft Central. Such an interesting place that allows you to purchase the goods already made or provides you with the raw materials to start from scratch and have it your way!

When I describe Liberty to friends and family back home in the States, the best description I’ve been able to come up with is, “It’s like if Anthropologie was a department store.” (If that store reference is lost on you, then follow the link for some serious eye candy—actually, there are new Anthropologie shops in London now on Regent Street and the Kings Road in Chelsea! Sadly, their stuff seems to cost the same number of GBPs as USD 🙁 ). Knowing Liberty’s history, it seems it has preserved its original vision of providing exotic, eclectic products possessing varied colors and patterns and vintage charm, making you feel like you’re purchasing something rather unique. Even walking around and taking in its atmosphere for free is unique in its own right.

So when you’ve relocated to London and are looking to add some classic touches exuding character to your new London apartment, Liberty is worth a look—and then some if you stay on for tea!