Moving to London and Traveling the UK: OLD York 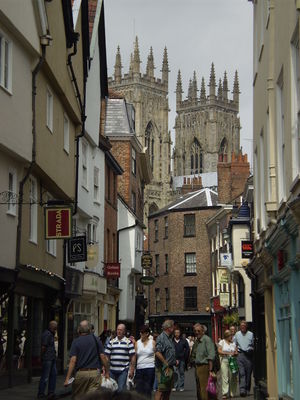 If you’re relocating to London soon or have already made your London move, you’re just in time for the spring bank holidays that make this season oh-so much fun! London expats and locals alike are particularly brimming with excitement over April. This is because the royal wedding on the 29th is adding another 4-day weekend right after the Easter one, so a lot of folks are taking a mere three days off of work to take a mega holiday of 11 days!

My husband and I are not doing the super-vacation, but we’ve definitely filled our weekend plates this season with getaways. I recently wrote about our trip to Val d’Isère, France, which was the weekend before last. So this past weekend we explored right here in the UK: good ol’ York. Just a couple hours’ train ride away via London’s King’s Cross station (using the East Coast train services), York is a positively easy weekend excursion.

Whereas York gave its name to New York, the name “York” itself derives from “Jorvik,” dubbed by the Vikings that settled there. During my first visit to York nearly thirteen years ago, I had visited the Jorvik Viking Centre, which I recommend as a way to learn more of this history. Other York must-sees are The Shambles (perhaps England’s most famous street of shops and restaurants…it could easily be Harry Potter’s Diagon Alley), York Minster (an awe-inspiring Gothic cathedral housing what I believe is the largest stained glass window in the UK, if not Europe), and Clifford’s Tower (originally built by William the Conqueror and rebuilt by King Henry III—standing atop its hill, it offers a lovely panoramic view of Yorkshire). And any local resident that you ask for sightseeing tips will tell you to take a walk along the fortress wall surrounding the village. At this time of year, the wall’s perimeter is adorned by lush green grass and sunny daffodils; absolutely beautiful.

We’re already hankering to re-visit York to do a bit more of the above, as the purpose of this particular weekend was actually to attend the Festival of Writing hosted at the University of York. Um, just go ahead and strike that campus off your list of must-sees. Let’s just say it’s more contemporary than what the usual traveler wants out of York…and the geese are territorial, sheesh! 🙂  In any case, I had a positive experience at the festival, learning gobs about the writing craft and the publishing industry, and getting to speak one-to-one with historical fiction author Emma Darwin, who also so happens to be the great-great-granddaughter of Charles Darwin. Ahh, England…I love ya. My six degrees of separation are so much cooler since moving here.

At any rate, we renegades did play hookey in the evenings to go play in central York, eating a marvelous dinner at the Blue Bicycle and digesting it over a pint at the Red Lion pub on Saturday. Sunday delivered us back to the Shambles in daylight, where we roamed the adjacent streets and soaked up the view of  York Minster from La Vecchia Scuola restaurant’s rear conservatory (the 300-year-old building has been converted from an old girl’s school).

We love our apartment and the city itself, but sometimes it’s just nice to step out into the countryside and absorb all the United Kingdom has to offer. York, England is yet another possibility of many for the weekend adventures to follow your London relocation!