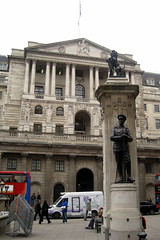 The Old Lady of Threadneedle Street

A lonely spinster sitting in her parlor, embroidering handkerchiefs? One of the greatest institutions that the world has ever known? Who was ‘The Old Lady of Threadneedle Street’ and why you will need her when you are moving to London?

So much to learn when you’re living in London and part of your adventure will be to get out of your cozy London apartment and explore the city of London while learning as much as you can about the fascinating history of London and England.

The Old Lady of Threadneedle Street was born during the war, one of the many wars, between England and France. In 1694, King William III, went down to his counting house and discovered that he was running a little low on gold bars. With the war effort gobbling up so much money, and knowing that his cash card would be refused at the ATM, he approached two gentlemen, who agreed to lend the King some cash.

As you all know, even if you’re not a King, if you take out a loan, you will have to pay it back along with interest. The loan agreement with William was to be paid back by taxing the public on the alcohol they consumed as well as a shipping tax on businesses. The original interest rate was to be 8% which would be paid back, in effect, by the British people.

(I would not suggest using this example when you’re negotiating a mortgage on your new London flat!)

While the imposing facade is definitely worth a look when you are living in London, it is well known that there is more of the Bank of England underground than at street level. Since 1973, the bank has employed a highly trained private security force, but until then it was guarded by the Brigade of Guards. Ever heard the expression, “It’s as safe as the Bank of England”? It refers to the absolute security of the bank throughout the years it has been in existence.

My question still stands through…who was ‘the old lady of Threadneedle Street’?

Anecdotal evidence suggests that there was at least one ‘old lady’ who visited the bank on a daily basis to ask for her brother. She did this for over 25 years starting in the year 1811. Sarah Whitehead lost her mind after her brother Philip, a former employee of the bank, had been executed after being found guilty of fraud. After her death, she was interred in the churchyard which became the Bank Garden, and some say that her ghost can still be seen visiting the bank every day…