Living in London – A Paris Jaunt 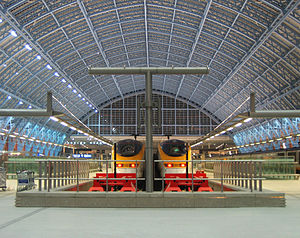 It might sound a little strange to be talking about Paris, when you’re facing a move to London, but it is after all right on the doorstep, and you simply have to take a few days to explore other places in Europe while you are living in London. Paris is called the ‘City of Light’, and it is one of the most romantic cities in the world. Taking a mini-break, which is what Londoner’s call a long weekend away, is one of the best ways to unwind and relax after a busy week in the city.

The best way to get to Paris, and indeed the rest of Europe, is to take the Eurostar. It is the international gateway to the whole of Europe right in the middle of London. Before the Eurostar came into existence, you would have had to take an overland train to the coast and then catch a ferry across the English Channel to get onto mainland Europe. The Eurostar has made getting into Paris and indeed to any destination in Europe, into an easy and hassle free travel experience. The Eurostar is a high-speed train that leaves from St. Pancras International Station every day and will have you in the heart of Paris in 2 hours and 25 minutes.

The Eurostar carries over 7 million people a year to different destinations in Europe. There are over a hundred available to choose from and there are a number of fantastic package deals that make a weekend trip to Paris into a fun filled and exciting way to get out of London for  a while. If you have children then you should consider doing a weekend trip to euro Disney, which is the European version of Disneyworld in the heart of Paris. If you are looking for a romantic getaway, then Paris is one of the loveliest destinations that you will ever have the pleasure of visiting.

If you fancy doing some serious skiing or visiting the pristine mountains and valleys of Switzerland, and Austria, then you should go on the Eurostar as opposed to waiting in the queues and possible delays at the European airports. With Europe at your doorstep, you will be able to expand your European knowledge and experiences in a way that you would never have been able to if you were not living in London. Living in London can be one of the most exciting times of your life, if you are prepared to give the city a chance to show you her splendour. You will be creating a lifetime of memories as well as a little history of your own. It is not many people that can say that they have just come back from Paris, France after enjoying a romantic weekend away.