Relocation to London – The Secret of Celebrity-Spotting in London 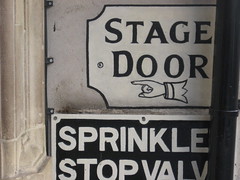 What is also key is to not be trying to find them; they’ll turn up when least expected. So far I’ve sat right next to Maggie Gyllenhaal at 202 Café in the London neighborhood of Notting Hill on Westbourne Grove, and just last Thursday I think Modern Family‘s Jesse Tyler Ferguson held the door open for me at Caffè Vergnano 1882 (near the Leicester Square tube station on Charing Cross Road, in the theatre district). London Relocation colleagues came to work one day telling me how they saw Woody Allen sitting right inside Notting Hill‘s Beach Blanket Babylon, where he was filming on the street right outside with Naomi Watts and Antonio Banderas—I recall having to scoot through their set really quickly coming in to work that day before they shot a rain scene (as if they couldn’t have just waited another couple hours for London to provide one of its own ;))! My friend recently brushed past Jason Schwartzman amidst the shops and cafés of Portobello Road, and another had seen Jude Law at a Starbucks in Hampstead (also spotted in Hampstead: Ricky Gervais). And I must say getting a glimpse of the royals during the Royal Wedding was quite exciting; those attending Trooping the Colour last weekend would’ve gotten a second chance at that, and we now know from the local papers how much Will and Kate love hanging out on the Kings Road and other locations in Chelsea, Kensington, and Knightsbridge…at least they did before when still living here, but it sounds like they’re coming back soon to live at Kensington Palace (by the way, like how I just equated royalty with celebrity? Is there a difference anymore?). But if you’d like to have more control over when destiny brings you and the stars closer together, then definitely take in a show where the A-listers step out on stage. So far since moving, I’ve seen theatre performances by Kevin Spacey, Sienna Miller, Keira Knightley, Elisabeth Moss, Ellen Burstyn, and Carol Kane, right from the first few rows where you can actually see the spit when they deliver their lines. You can also register with the Applause Store and get tickets to be in the studio audience of locally-produced television shows. Or do what one of my friends does—sign up with a casting agency to be an extra and spend a day or so on the sets of movies filmed in England (my friend has played a witch in the last two Harry Potters!) Maybe this stuff isn’t your thing, or maybe you’re ready to be star-struck. Either way, “the world is a stage,” so your international relocation to London will put youin the spotlight of an exciting new life. Contact us if our London relocation services can help cast your fabulous new apartment rental!