Most Haunted Places in London Part 1

With a city as old as London it should be no surprise that there are certain areas where tragic events have occurred that seem to hold onto that energy of the past. There are countless corners of the city where the veil between the living and the dead has worn thin and sometimes things slip through. Those places might be where strange occurrences have been known to occur. Perhaps it was the sight of a murder or a terrible accident. Whatever the event, something has held on to the energy of the moment and has birthed a paranormal site.

These events could occur in a hotel, office, home, or hotel. Ghosts and spirits pay no mind to the standing of the locale. They will frequent a hovel just as soon as they would a castle.

Looking for a scare? Perhaps a scary story or two? Well, you’ve come to right place.

Sutton House was built by Ralph Sadlier in 1535 located in Hackney. A courtier to Henry VIII, the property had no paranormal experiences associated with it. During its existence, it has been home to schoolmistresses, merchants, silk-weaver, and clergy. It was left to fall in disrepair until the 90s when it was restored and reopened to the public as part of the National Trust.

There are several ghosts who frequent this property. Patrons can still hear dogs wailing late at night which are said to the be the hounds of John Machell, a local wool merchant. If dogs are brought into the house, they all freeze and become transfixed by something on the stairs.

The White Lady is the show stopper though. She is believed to be Frances, a lovely woman who died while giving birth to twins in 1574. Her apparition can be seen hovering around the structure. 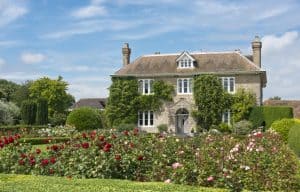 The Most Haunted House in London

Built in the early 1700s a renown architect by the name of William Kent, the home at 50 Berkeley Square has seen more than its fair share of tragedy. Largely considered to be the most haunted house in London, this building is now the headquarters of Maggs Bros. booksellers.

There are a few odd stories about this property. One of the most popular is that a ‘Mr. Myers’ who was a known recluse that rarely left the house and could be seen roaming the interior of the structure at all hours had been jilted by his fiancé.

In the attic is the spirit of a young woman. She threw herself through the top floor windows of the house after suffering abuse at the hands of her uncle. This young woman sometime appears as a brown mist and has contributed to two deaths of people who were staying there.

While staying in the home, in 1872, Lord Lyttleton had stayed the night in the attic and fired his shotgun during the night. The next morning no shells were found. Just a few years later, in 1879, a maid stayed overnight and went mad, dying in an insane asylum the very next day. On one particular night, sailors from the HMS Penelope stayed at the house in 1887. During the night one sailor died while feeling the house, tripping and injuring himself.

Quite the lavish hotel, this structure was built between 1863 and 1865 and was considered so ostentatious that it attracted such clients as Mark Twain, Napoleon III, Arturo Toscanini, Antonin Dvorak, and Oscar Wilde. While there have been reports of ghosts throughout the building, most of the activity is centered around room 333.

In 1973, BBC radio announcer, James Alexander-Gordon stayed in room 333 only to be awakened during the night by a fluorescent ball floating in the air in front of him. As he watched, horrified, the ball shifted into a man wearing Victorian evening dress. The ghost floated toward him, James realizing its legs had been severed, its arms outstretched. He didn’t stay the rest of the night and fled.

This property was built in 1756, housing soldiers and nobleman who stayed at the hotel while Bonnie Prince Charlie set up his camp in Derby.

This hotel has been a host for all kinds of paranormal activity. One legend surrounds a former male guest who has been seen wearing the pin-striped suit he had worn the day he died in his room. He is anything but quiet as he roams the halls, slamming doors knocking on doors in the middle of the night. He has also been known to move things around as well, guests reporting their items in complete disarray come morning. It is said that room 10 and 12 have the most activity of any of the rooms. There are items frequently knocked from shelves. Guests also frequently have items missing too. 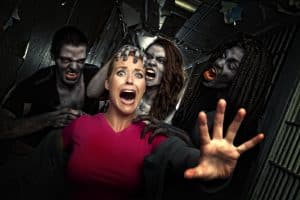 If Londoners thought he was frightening while he was alive, he’s downright terrifying now that he’s dead. He sits in the lounge area, reading a newspaper and watching the customers come and go, passing judgment. He is said to rattle glasses and his newspaper as he watches.