Mary I, Queen of England 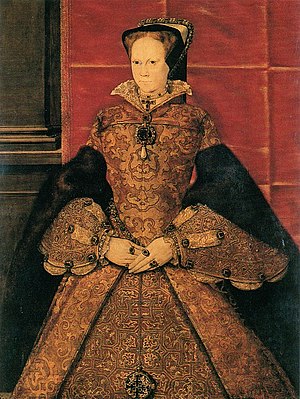 A relocation to London means getting familiar with a new destination and its history as much as it’s about starting a new job or finding a London apartment rental. So I welcome you back to another installment of our Weekend Warrior Sunday series that follows the British monarchy through the centuries. Last week, we learned a bit about the tragic nine-day reign of Lady Jane Grey. Today, we’ll meet her executioner and successor, Mary I—or, as you might best know her, Bloody Mary.

To be fair, Mary does get the shaft where her succession is concerned, just like her mother, Catherine of Aragon, had when Henry VIII went so far as breaking from the Catholic church to divorce her because she couldn’t deliver a male heir. So here we have Mary who is next in line to Edward VI, but who is declared illegitimate by that brother so that Lady Jane Grey can be given the throne. Mary’s legitimacy is contested on the basis of Henry’s earlier allegations that his first marriage to Catherine was incestuous, as Catherine had first been his brother’s wife. Indeed, when Henry VIII leaves Catherine for Anne Boylen and this second wife provides him with another daughter, Mary is sent packin’ away from her parents and loses her status as “princess.” It is only when Henry’s marriage to Anne Boylen falls apart and leads to her death that Mary returns to her father’s court.

But Mary, is having Lady Jane Grey executed really necessary? She didn’t want to be queen and gives up her crown to you; isn’t that enough? Apparently not. The punishment for high treason is death, whether Jane was behind her own succession or not.

So. Mary. She’s Queen of England now, and the first to assume such title as her own birthright. She’s also a staunch Catholic, which is problematic for those who were hoping for England to become a Protestant state. Thus, while Mary I had garnered enough support to retake her throne, it starts to slip away on the religious front; well, maybe more so on the financial front, as many have prospered from the monies allocated after the Catholic church lands and possessions were already taken over and dissolved. Mary’s desire to marry Prince Philip II of Spain is further problematic. Why? For the precisely the same reason as Henry VIII hadn’t wanted a female heir. A female monarch is perceived as weaker and susceptible to losing power to a dominating husband; especially feared is if that husband is a foreigner. By the very virtue of being Spanish, Prince Philip is distrusted, and being a Catholic doesn’t help him either.

Yet in 1555, Mary marries him anyway. She’s riding the high of suppressing Sir Thomas Wyatt’s rebellion that same year and wants more of her way. Well, in trying to restore Catholicism, her-way-or-the-highway happens to involve burning hundreds of Protestants at the stake, earning her the nickname “Bloody Mary” (no, it wasn’t because she liked celery and vodka in her morning tomato juice).

By 1558, England is defeated in war by France, losing its last French territory, Calais, and, since when it rains it pours, that same year Mary is left by Philip, falls ill, and dies. She’d borne no children but instead left behind a citizenry thoroughly disillusioned with her reign and a nation that would not be Catholic.