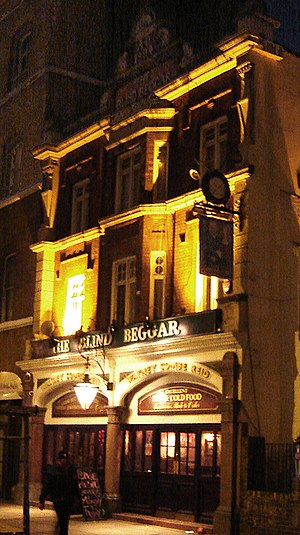 If you’re making an international relocation to London, part of the urban landscape and national culture are the quaint and historic pubs scattered all over the city. Unlike a lot of typical bars in the States, the British pub is not a place where you have to feel sleezy popping in during the afternoon or even imbibe. These classic and picturesque public houses are typically characterized by dark wooden furnishings and trim, floral wallpaper, and overflowing flowerboxes ornamenting their exteriors. They make for an insanely cozy place to warm up and cheer up on a dreary grey day and offer comfort food, tea, coffee, soda, and, of course, ales, wine, spirits, and…well…spirits. And I’m not talkin’ liquor this time.

It’s October, ladies and gentlemen, so what kind of American expat Halloween enthusiast would I be not to hijack this blog for a few days to share with you some of London’s most haunted pubs?! These will be a fine way to treat (maybe even trick, if boozy enough) yourself before Halloween if you’ll have already made the relocation by then, but rest assured, these locales maintain their paranormal activity all the year round for your enjoyment. So let’s get our ghost on, starting with:

The Anchor Tavern – 34 Park Street, SE1. Situated near the Globe Theatre on London’s Southbank, this 17th century pub is allegedly haunted by a dog that tried to protect its master from being recruited into the King’s Navy. The poor canine had the heavy pub door slammed on it in response, which severed the dog’s tail and sent it howling into the night, never to be seen again until its ghostly apparition returned to sniff around for its tail and/or master.

The Black Cap – 171 Camden High Street, NW1. This pub bears the baggage of its first landlady, who was accused of being a witch, whose parents were convicted of murdering children via black magic and consequently hanged, and whose lovers met their deaths in suspicious fashion as well.

The Blind Beggar – 337 Whitechapel Road, E1. This pub is notorious for being an east-end gang haunt, and its bloody past includes two murders: one in 1904 between members of a pickpocket gang, in which one guy stabbed another in the eye with an umbrella, and another in 1966 when gangster Ronnie Kray shot his rival George Cornell in the head. Like irony? The song playing on the jukebox at the time of this latter killing was “The Sun Ain’t Gonna Shine Anymore.”

That will do for now as your teaser taste of the macabre. If you’re thirsty for more ghostly pale ales (wink-wink), join me next time for a few more of the haunted pubs. As for your move in the meantime, our London Relocation agents have the true “spirit” you need to successfully find the apartment that will become your favorite haunt in no time.